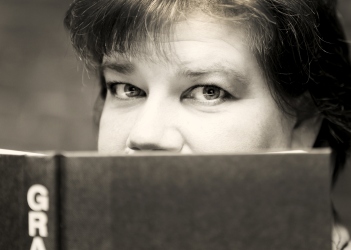 I have been teaching kids to read for nearly 20 years. It is my love to see understanding light up their little faces. It is my joy to watch their eyes shine with recognition of newly acquired words. As part of this passion of mine, I get to teach Greek and Latin affixes, which helps students break words down into segments in order to decode their meanings. Once they understand this concept, they have many ah-ha moments as they realize how words they have known their whole lives are actually made up of pieces, and have different meanings depending on which pieces they use.

The kids begin to see it gradually and slowly they catch on. It is much like a jigsaw puzzle coming together at a snail’s pace until one day the picture is clear, making it easier and faster to complete. My job is to help them get the edges together and to sort like-pieces into piles. I attempt to give them a framework on which they can build, until the day it clicks and we all shed a few tears together in joyful accomplishment. I am not always a party to the “clicking” however, I know that even if it occurs years beyond the instruction I give, I have at least helped to put the edges together on which the rest of the image will attach.

This week, I was reviewing some words with my students when I had an ah-ha moment of my own. The word was encouragement. As we broke it down to make it easier to spell, we also discussed the meaning of the word. En- meaning ‘in.’ Courage- meaning ‘brave.’ Ment- meaning ‘the act of.’ I guess I should have seen this before now, I mean I have been teaching this stuff a pretty long time. But for some reason it jumped out at me on this day and I fell in love with the word all over again.

Encouragement- The act of putting bravery into someone.

For my students, this was an eye opener. How do you make someone brave? How do you build up their courage? What does it mean to put it “into” someone? What does that look like? The moment was a quick one and we were soon on to other words, but this word and its meaning captured me. I think because in this day and time there are fewer and fewer encouragers. (encourager- one who puts bravery into another.) It seems that everywhere I turn…news, politics, entertainment…there are conversations and arguments that do the opposite of building up courage.

Sometimes I have my students create “nonsense” words to practice the meanings of the affixes. If I had to put a word to our current state of affairs I would say it is enfearment-the act of putting fear into another. Or maybe enpanicment. Perhaps enterrorment. Courage isn’t even in the discussion. Fear rules the day. Yet, on one day, in a classroom, during a simple spelling lesson, I was reminded of a critically important word and its meaning. I was reminded of what I aspire to do on a daily basis, and though I am not always successful in my endeavor to do so, I still make it my goal to put courage into others. I can build up. I can instill confidence that will lead to bravery. I can look for the positive. I can turn others away from fear, and find the ability to inspire courage. I can speak the truth. I can turn off those that are enfearers, or enpanicers, or enterrorers. (I take this making up words thing seriously 🙂 ) I can close my ears. I do not have to listen. I can, instead, be one who operates in the act of putting bravery into others. I can offer encouragement, and so can you.

Thus ends my lesson for the day.