But while he was still a long way off, his father saw him and was filled with compassion for him; he ran to his son, threw his arms around him and kissed him.  Luke 15:17

This has to be one of my all-time favorite scriptures.  It is from the parable of the Prodigal Son and the imagery is so powerful that I can picture this hug.  I can feel it.  This father who hasn’t seen his son in forever is so thrilled and moved that he takes off running.  He does not stop to reason it out, he moves on emotion alone.  I think that is the main reason this story captures me so…the passion of it.  I have heard it said, “You cannot rely on your feelings.”or “God is more than emotion.”  I even understand these you-better-be-cautious statements to some degree, but I think it is important not to throw out the baby with the bath water.  I think that sometimes, holding back emotion is just as damaging as over expressing it.

If I am created in God’s image, and he shows the kind of emotion that has a father racing with abandon to embrace his returning son, shouldn’t I too express my feelings?  My perception of God is that he feels…deeply.  He expresses himself with tears at the tomb of Lazarus, with passion to the money changers in the temple, with sorrow at the betrayal of Judas, with compassion to the adulterous woman, and laughter among the children.  Jesus came specifically to show us the heart of God, and if you know that, you must see his heart as one full of emotion born out of his love for us.

I have often pictured this long hug over the years as I read my favorite parable.  I can see the father suck in his breath and cover his mouth when he sees his son “a long way off.”  I can feel the tears that spring to his eyes, even as he gathers his robe up around him so he can make better time.  I know that as he sprints the tears are probably rolling down his cheeks as a smile takes over his face.  Nothing else matters.  All else falls away and like the Chariots of Fire moment, everything is in slow motion.  He does not even notice his son’s discomfort…or if he does, he ignores it completely.  He wraps his slobbering, winded self around his son as if his life has been returned to him.  As if he can finally rest in these quivering, fearful arms that try to hold him back.  He listens to the speech and quickly puts any notion of abandonment aside in favor of a party to celebrate sonship.  I can see the amazement on the face of the son, and feel his burden, which is lifted off by love, evaporate into restoration.  Slaps on the back, laughter and the father walking with the son arm in arm, are the result of instant reconciliation.  Tears and smiles and laughter all mixed together into a beautiful mess of emotion which brings life to all who witness it. 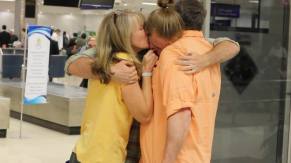 On my trip to Thailand I got the chance to FEEL this hug.  Not that Hannah had been off squandering away her inheritance or anything, but the long distance coupled with the months gone gave me a small taste of what the long hug feels like.  The anticipation created butterflies in my stomach.  The sight of her brought tears immediately to my eyes.  The hug itself was such a comfort, that I didn’t want to let her go.  Just to have my arms around her felt like home to me, as if all had been set right in my world that had been missing such a big part for so many months.  The emotion of it is an indescribable treasure.  It was a moment where the idea that the father would run to his child who had been gone so long was fully understood.  It was overwhelming, and exciting, and such a relief.  It was a beautiful mess of emotion…the long hug.