What it is about the voices of children?  No matter what language they are speaking, when they sing or talk in unison it is like a melody.  Maybe it is because I am a teacher that I find the sound so irresistible, or maybe it is because of the way it makes me feel to hear innocence floating through the air.  Something within me is drawn to it like a moth to a flame.

On my trip to Thailand, during our first stop at Remember Nhu Children’s Home, I heard it.  The room was filled with WR parents and racers, in addition to the resident children.  So much so, that many of us waited outside instead of in.  Lunch was being served but just before, the children spoke a blessing.  I could not see their smiling faces, which is usually the way my heart is captured. Instead I HEARD their voices and though their words were foreign to my ears, my heart leapt and my eyes teared up. 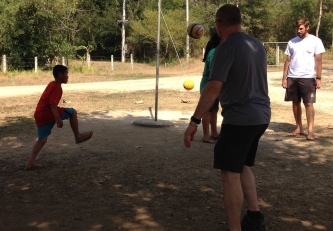 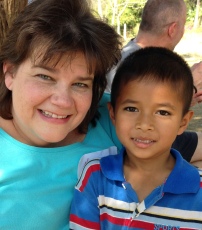 I don’t know what they were saying, but it was beautiful.   It wasn’t the words that caught my attention, but the tone.  It sounded like hope and innocence.  There was a purity in the sound that called out to the little girl in my heart.  The part of me that loves freedom, and wind, and wildflowers.  The part of me who climbs trees, rides horses, jumps rope, blows bubbles, runs through sprinklers, blows dandelions,  swings to the clouds, wades in the creek, plays kick-the-can, spud and hide and seek.  The part of me that loves, without reserve or caution.  The voices of these precious children, rescued from the clutches of slavery, were like a healing balm to my fragmented heart.  Innocence called unto innocence.  Deep called unto deep.  Their voices called to my heart to come and play.

Later I watched them play beauty parlor by putting flowers in each other’s hair.  They chattered in their native tongue, giggling and pointing at all of us Westerners who were trying their clapping games.  They laughed as they ran circles around us with their soccer balls. Their eyes shone with the sparkle of hope and happiness.  Life was reflected in their big brown eyes.  Their laughter had a lilt that was light and airy and sweet.  I could not help but think of what almost was for these children.  Almost slaves.  Almost prostitutes.  Almost…but not quite.   Rescue had come for them.  Opportunity for a future.  Love and life.  Hope and healing.  All of it was evident in the voices of the children.