As I rode with my windows down and the sunroof open, it seemed the pull of a tractor beam grabbed the jeep.  My foot, in opened toed sandals, pushed the gas forward into the force which beckoned me.  The car moved towards its own destination despite my best intentions to turn it towards the piles of laundry and dirty house.  Soon my heart was leaping in time with the blaring music, and my face was overtaken with a broad smile.  Only my mind was left to fight against the force of spring, and once the turn towards the trail was made, even it gave up the struggle and went along for the ride.

Arriving in the parking lot with the wrong shoes, the wrong clothes, no hiking poles, no water and no park pass could not deter the pull to the trail.  The breeze said, ‘Hurry up,’ as soon as my feet were out of the car.  It has been a long winter.  My trips around the lake have been non-existent for numerous reasons, one of which is the crazy weather.  But on this day, the weather was perfect…the sky clear, the breeze cool and constant, the water beautiful.  I began and soon my body remembered where to go without my mind having to tell it.  I was not the only one caught up in the beam…there were people everywhere.  I first came across some folks that didn’t know the trail goes BEHIND the guard rail on the part next to the road.  I was glad they were headed the opposite direction and I kept on moving.  Soon I was padding along the pine straw covered path, my footsteps quiet, my ears tuned into the music of the wind.  The tops of the trees were wrestling and swaying, starting the chorus that then traveled down to the lower branches with a sound that brushed by my face and swirled around my ears.  It tickled my nose and made my feet move faster to keep time.

Soon there was laughter bubbling in harmony with the creek.  The camping area was full and children giggled, while boys trudged in the creek, crawling through the culverts under the walking bridge on their bellies.  I moved past, grateful that they were not my boys about to get stuck in a pipe.  There is freedom in keeping moving.  The stream continued to babble, keeping me company as I walked.  Every dock had people fishing on it.  I didn’t slow to ask if fish were biting today.  I already knew the answer would be no.  Fish are shy around crowds of fishing poles.  Keep moving.  Around the path to the place where the deer stop to drink, there was a tree mostly chewed up.  The beaver hadn’t quite got it down, but if he keeps it up I would think in the next few days there will be a log across the trail.  No deer today.  No bear either.  Wildlife scatters when the people come.

Except for today, there was a snake.  I saw the crowd gathered before I saw the snake itself.  They were perplexed as to whether they should keep hiking or turn back.  City folk.  I know this because I used to be one of them.  Now I am a hybrid. Half city, half country.  I could hear the fear in the mom’s voice as she told her children ‘this is why we stay on the trail!’  I snickered under my breath…as if snakes do not get on the trails. Haha.  I peeked over the shoulder of one of the kids to see a good sized water moccasin sunning himself, unaware that he was the star of the family’s walk.  They were trying to figure out if it was poisonous or not by looking at the eyes and snout.  I was thinking if you have to get close enough to the head to see, it might be a pretty big mistake.  Seems much easier to know the pattern of the scales, since you can see them at a distance.  That’s what living in the country has taught this city girl.   As I went around them I told them it was a water moccasin, and once again kept moving.   The wind was calling me deeper, and when the wind calls my spirit answers. 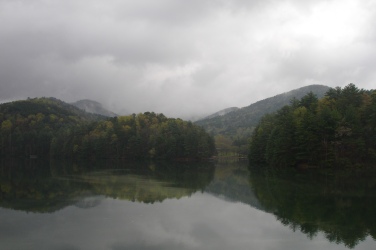 The path was quiet for some time. The ripples on the water moved with the wind creating a shimmer that scattered across the surface of the lake in the sunlight.  I lifted my chin, my face to the sun.  Soaking up spring, knowing that it might snow on Tuesday, I filled my lungs with warmth…and probably pollen.  Still, breathing in newness is very refreshing.  I am a lover of seasons.  All of them.  I wait with anticipation for each one.  Spring plays with me and winter wrestles to keep a grip…this year a pretty strong one.  However, I know that spring will win.  The pear trees are already putting on their green dresses.  The flowers have burst onto the scene bringing color to the gray/brown forest.  It is only a matter of time now, until the time of greens…all shades and hues…will blanket every mountain, and valley.  Today was just a taste…one glorious taste too good to ignore.  Sometimes you just have to let your spirit take you…