I am a planner. When I travel, my planning skill manifests in arriving at the airport extra early.  Whereas Bill would slide in on two wheels 20 minutes before take-off, I want to be there an hour before the two hours they recommend, “just in case.” When I lead trips for my work we have everything planned out ahead of time…mostly.  But when you travel internationally everything is subject to change, and the resulting travel stories are like a badge of honor.

My most recent travel story came on my trip to Asia. It started out as a good day.  My first flight was on time with an empty row all to myself.  Arriving in Germany me and my travel buddy Lisa, whom I was training to lead trips, decided to venture out into the city of Frankfurt rather than sitting in the airport for our 5-hour layover. We made our way to the train and stood in front of the map to find our stop.  However, neither of us reads German, so we asked a couple nearby who were tourists just like us. They had no idea what they were doing.  So, of course, we followed them.  Maybe not the brightest move, but there was a camaraderie in our shared sense of adventure.

We found a ticket machine and bought a ticket.  One of the words written on it was Frankfurt.  Win!  We got on the train that was possibly going in the right direction and found there are numerous stops in Frankfurt.  How to know when to get off?  Ask another total stranger, of course. He told us if it were him, he would go to the opera house.  Old area, lots of cafes. Sounded perfect to us, so we took a chance he was legit.

We climbed out of the station to ground level. The weather was nippy, but clear and sunny. There was a beautiful park, and the Opera House was just as spectacular as he had promised.  We found a café which had lattes and crepes.  We enjoyed conversation and being in Germany on the first leg of our adventure.  When we went to get back on the train, we wondered if we needed to buy another ticket and since no one ever checked our ticket on the last ride, we opted to get on the train without purchasing another.  We still had the one with Frankfurt printed on it, after all.

We found what we thought was the airport stop on the map because it had a nifty little airplane next to a long German word, so we headed that way.  The train we were riding stopped a few stations into the trip, but being the smart foreigners we were, we knew we weren’t to the airport stop yet so we stayed put, that is until the doors closed the lights went out. Noticing we were the only ones on the train, we quickly realized the voice speaking German just moments earlier must have said something important.  Fortunately, for us there was an emergency exit button on the door, which we briefly wondered if it would sound an alarm.  Trapped inside the train in the dark, it occurred to us we might miss our flight if we did not get off, so we threw caution to the wind and pushed the button, anyway. Thank goodness, the alarm did not sound and the door opened welcoming us back onto the platform.

We proceeded to ask more total strangers which train to get on to get to the airport.  After a bit, God sent an angel who spoke English to direct us.  On the move again, all was well.  We knew what stop to get off at and we were basking in our refreshing trip. Feeling quite accomplished, as you do when you are successful in navigating in foreign places, we were taking in the sights while riding through the city.

I have read that pride comes before a fall and it proved to be true on this day.  The ticket lady came to check our tickets and when we gave her our original tickets, she told us they were not the right ones.  They were one-way tickets.  We offered to pay her for correct ones and she informed us we had broken the law and we would have to pay a hefty fine.  We pleaded ignorance and confusion; she got her boss.  We begged to pay for a correct ticket; he escorted us off the train.  We apologized for our stupidity in following another tourist’s directions; he took us to an ATM and held out his hand.  We withdrew a hefty fine…for each of us…and paid the man so we could catch our flight.  Lesson learned, but it made for a great story.

Little did we know, on the next leg of the journey the story would get better. When we arrived in Asia, it was 1:30 am.  We had a 10-hour layover, so we had booked a hotel in the airport to grab a few hours sleep before our next flight.  We stood in immigration line until 3:00 am.  Once we were officially in the country, we began to look for the hotel by following signs written in a foreign language, and asking multiple people who didn’t speak English; we got lost.  We called a number and they sent a man to find us.

By this time, it was 3:45 am. I had been awake for most of the previous 36 hours and had little to no food because the airplane food was terrible.  He looked at our papers, and said, “We have a problem.” Not what you want to hear at 3:45 am after 16 hours in the air.  Our booking was incorrect, for numerous reasons, mainly that we were flying out of a different airport the next day which was news to us.

“You cannot stay here if you are flying out of another airport.  You will have to book at another hotel,” he said.  My eyes filled with tears.  My lips trembled.  If I opened my mouth, I knew a major meltdown would occur. It was right below the surface, I could feel it. I knew it is not always helpful to have a meltdown when trying to navigate foreign places. So, I did the only thing I could think of, I threw my trainee, Lisa, in the deep end of the pool.  She managed to stay calm and make arrangements beautifully.

How nice that the man’s friend worked at the place where they book hotels. I hate it when you know you are being taken advantage of but there is nothing you can do about it.  We were over a barrel.  They knew it, and we knew they knew it.  So frustrating.  Sometimes you just have to take the hit and pay the cost. The hotel man’s friend showed us a picture of the rooms on his computer and they looked nice enough. $70 for a few hours, seemed crazy, but it was a nice place, and we were desperate, so we agreed.   At this point it was a matter of trying to find any place other than the chairs in the airport.

We prepaid for our cab ride as well, and a different man ushered us out to the cab stand.  The cab driver looking at our receipt to find the address of the hotel, said we paid too much. Then he offered to help us cancel and book another hotel.  Wasn’t that nice of him?  We already knew we were being taken advantage of, so we refused any further assistance.

When we turned around the man who was escorting us was gone. So, we dragged our bags to a different stand that had a big sign which said, “Pre-paid Taxi.”  We showed our receipt to a guy who was happy to help us to his cab, but just as we were about to get in, our first guy came running across the lanes of cars screaming in Hindi.  The two were inches apart and yelling in each other’s faces.  We were witnesses to an altercation in progress at 4:00 am in Asia.

By this time, we called our host and when he asked me where we were my mouth could not make out words because of the tears. Again, I handed off to Lisa, as I was melting down while trying not to be pulled into the altercation in front of me. We finally managed to get into a cab with the original guy we had paid, while offending another man who literally lifted our bags from the ground to the trunk and was surprised to find two tired and hangry American women do not tip for lifting bags into cars. 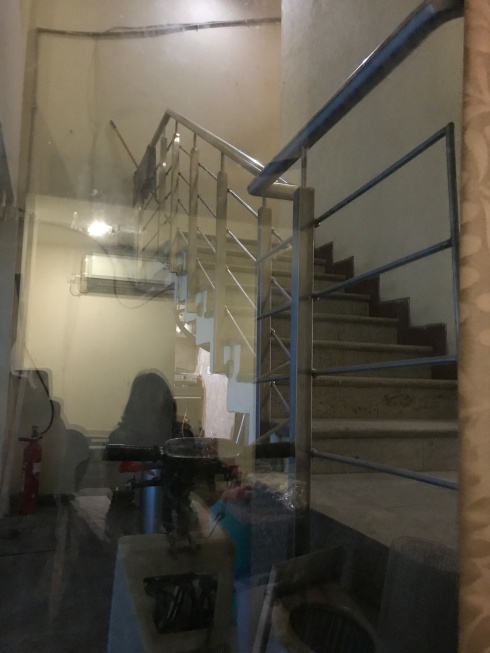 The cab driver seemed to have the address but didn’t know where it was or how to get there. Thank God for google and Lisa, who directed our taxi so I could maintain some composure. We finally reached the hotel at around 5:00 am. As they walked us to the dungeon, we realized the pictures we had seen on the screen at the airport were not exactly accurate.  There was mold and mildew on the walls, but there were two beds.  We asked for towels that never came, so we decided not to shower.  We pushed back the curtain, and the window opened into the stairwell that people walked down…kinda creepy.  We were just happy to have a bed even though it wasn’t a great one. We fell into bed in our clothes, with no food, no shower, and a simple prayer that we would not contract any diseases from this room. Three hours later, our alarm went off and we started a new day, thank goodness for that.

P.S. One of the moms on our trip had an incorrect date on her visa, so the next day as we were traveling, we were also trying to get her into the country.  Thank God our host has friends in high places in the government and was able to get her out of “airport jail” in time to make the trip to see her daughter.  Her travel story will go down in history!

7 thoughts on “Badge of Honor”