The participants in the race gathered in the valley. They were milling around, anxious to get going. The starting line was crowded, the ending point in was in sight. But who would make the climb to the top the fastest was in question. All were standing at the ready. Then the race began. The pine trees took the lead right away. Their olive green was already interspersed among the throng of others. If you watched closely you could see them dotted most of the way to the top of the mountain, but not at the very top. They were more like fingers grasping for a prize they could never win. Next the Maples made a run for it. Their reddish pink leaves blended with the drab brown, until the color changed to a pale asparagus green. They were in stark contrast to the deeper hunter green pines. Light and dark. Side by side. Both establishing their places in the race early. 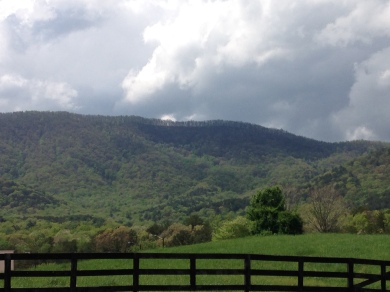 At the base of the mountain the flowering trees stood and cheered, not having teams in the race, they were enthusiastically waving their arms for everyone. The Dogwoods stepped up and added some pure white bouquets scattered over the mountainside, which highlighted the change of the guard from brown to forest green.   Soon the Oaks, with their kelly green leaves, began to sprint for the top. At first, their leaves were barely unfurled and appeared as a lacy green blanket over the base of the mountain. But then, about half way through the race, the rains came. For days and days. 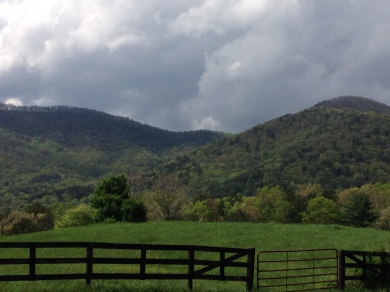 The participants were not deterred by the storms but continued on. The showers inspired some to make a break for it. The Oaks were among them. The others were the Poplars, the Birch, the Sweet Gum, and the Elms. Every shade of green you can imagine…all pushing their way towards the finish line. Avocado, chartreuse, lime, mint, and yellow-green created a plethora of color. Who knew monochromatic could be so varied and exciting? Soon a mist covered the mountain shutting out the spectators from seeing the progress of the race. It seemed that the mountain had disappeared and that surely the race must have been canceled due to the inordinate amounts of rain that poured down. 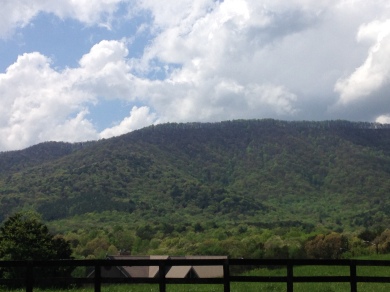 Yet, when the sun came out, and the soupy fog lifted, the participants were even closer to the finish. They had spread across the entire mountain and it seemed as if it would be a photo finish, as all the racers converged together near the top. Then one day, along the ridge at the very tip top a loan tree unfurled its leaves and like a flag being planted on the moon, it claimed the victory. Taking the mountain for its own. Where just weeks ago had been a jagged mass of tree skeletons, was now reclaimed territory. Other greens continued to fill in the line of silhouettes and will do so for weeks, until the whole ridge is complete…life practically glowing in neon green from the top of the mountain. In the end, it was impossible to tell from the bottom which team won the race. It is so every year. But in the end none of the participants really care who wins, only that they all make it so that they can all cheer together…blending to make a beautiful hue of summer green.