So how do you hide from God? You can’t. Not really. It is kind of odd that I wanted to hide from him, since he was the one who rescued me during the darkest times right after the accident. But that was before the church fired Bill, and before our baby died. It was the repeated pummeling of my heart that caused me to withdraw from him. It just seemed to me that if he loved me so much that he could have stopped the painful shattering before it destroyed me. He didn’t. I was mad, and sad, and hurt, and betrayed…by God. Seems funny to read that now…betrayed by God…laughable even…but at the time it was a breach of trust. The one I had served and tried to please most of my life had left me high and dry…wallowing in my sorrow… wading in my self-pity…wondering at my sacrifice. I mean, what is the point of serving God if he doesn’t protect you from pain? Why would I give up time and energy for him if there wasn’t some kind of benefit that my life would go smoothly?

This is taught from every pulpit…if you obey God his blessings will follow. It might not be said that bluntly, but it is the kind of teaching that seeps into your belief system. Therefore, if the blessings of God are not on your life you must NOT be obeying him. That subtle little gem chips away at you when trouble befalls you. And when trouble comes by the truckload, you find yourself in a wrestling match with God. I did anyway. What am I doing wrong? Why did this happen to me/us? Why won’t you help me/us? I would rail at him, because I believed that he owed me. I believed him to be something other than what he is. I thought that in some way his action or inaction depended on mine. I was caught in the performance trap that says if you do this…then God will do that. If you don’t do this…then he won’t do that.  That if/then correlation is a lie. Just so you know. 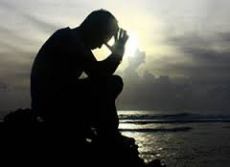 In my fight with him, I tried to walk away, but found that even though I was mad as hell, I loved him deeply. I realize it seems incongruous, but it is possible to both love him and be angry with him at the same time. I would go so far to say that he sometimes wants us to be in that position, so that he can root out the lies we believe about him. In the midst of this turmoil of heart, I was also realizing that Bill might not come back completely. He and I were working on things, but we were miles apart through no fault of our own. I had tried in my own strength to suck it up and make it work. Tenacity and all that. Secretly, I blamed the whole mess on God. My expectations of how God should respond, what he should and shouldn’t do…all of it came flooding like a tidal wave knocking me down and washing over me like I was a small insignificant grain of sand.

During this time I also seriously considered if I should divorce Bill, because I was already tired and there was no end in sight. We were out of the volatile stage, but the reality of long term caregiver was kicking in and for the first time I allowed myself to consider what life would be like if he didn’t get better. What if he was stuck in this stage forever. Now that I had come to grips with the fact that God doesn’t act based on my actions, I realized that he may not act at all. That he may not intervene on my behalf in the situation. I had taken my vows…till death do us part. Could I really break that promise…obviously Bill was not dead…so what if I left? What would that do to him? To me? I would feel that I failed or broke my promise and I knew guilt would eat me up…but still…could I live like this from now on? I was between a rock and a hard place. No easy answer, no matter what anyone said. Once again I pointed my finger at God. Once again, I told him how unfair it was of him to put me in the position of having to make this horrible decision.   A hard decision…too hard for a 24 year old to make. I remember the evening. I was in the car having it out with God about all of this. I came to the conclusion I could break my vow to Bill, but I didn’t just make it to him…I vowed to God as well. And even though I was ticked off at God, I couldn’t break my promise to him. I made a decision that night to stay. Not to trust in my own ability, I KNEW I had none. Not to trust in Bill to get better, I KNEW he might not. I decided to trust in God and him alone…even though I was madder than a hornet at him, he was still my only hope.

Now I look back and I SEE. I see that my pat religious answers had to be taken out by the roots. That I had to experience that grace is not a theological idea, it is life itself. That God is not subject to my actions, nor does he owe me. That the false view I had of God could not stand. And so when I ran away to hide from God…I was actually running to him. He wrestled with me and I with him and he blessed me with a limp that forever changed my walk. 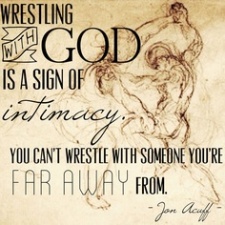 3 thoughts on “How do You Hide from God?”