I guess you may have noticed I haven’t written in a while. Honestly, I do not know what to write or how to start. I do not know if I CAN write this part. Yet, my story is not finished. If I stop it will remain incomplete. I have told myself “Just write. Just because you write it doesn’t mean you have to publish it.” And so I sit in my chair and I poke at these keys. Miraculously words form and find their way to the screen in front of me. My breathing is quickened because this part of the story does not want to be told…or more like does not know how to be. My time at the hospital after Bill’s brain injury was beyond hard. It shattered my dreams, and hopes in ways that took years to understand. But my time at home shattered ME. Wow…tears already, this is not going to be easy. What I have to say is important, but it is also more than painful. I have a sudden desire on this rainy morning to run to my room, lock the door, get in my bed and curl up in the fetal position in the dark. Actually I can picture that in my head so clearly that I think it is more than wishful thinking…I think that it is what I did, figuratively so very long ago.

Once we were home and the meals of compassion stopped coming…my nightmare started. There are no words in my journal to help the memories along for this part…only page after blank page. It is like the story stopped, only it didn’t…this is the part that is buried deep. Hidden in my broken heart. It is the invisible, silent suffering that goes on behind closed doors. I am afraid to tell it. I am afraid of how it sounds, of how it portrays my husband, of how it portrays me. I am deep breathing now…”you don’t have to publish it” is ringing in my head. Just TELL IT. My heart is screaming at me now…Just tell it!

TBI changes people forever. You want them to be the same, but they are not. The reality of this became clear and my idealistic bubble of a quick recovery once we were home was burst. There were no nurses to call when Bill’s anger surged. No call button, no therapists down the hall, no windows in the door so that safety was observed. It was me and him. And he wasn’t really there…only some shell of him that was mad, and sad. The mood swings were like a pendulum. Extreme to extreme. Rage that changed my role from wife to prey, in seconds. I found out how to hide in my own home. I learned that if you can get small, and be quiet long enough the mood will change. I learned that words can hurt worse than fists, and that though he forgot the instant the outburst was over, I could never erase the words hurled at me. I was a rabbit, trapped.

I lived in fear much of the time. However, the rest of the time, I was his only source. He clung to me like life, because his fear and insecurity was only held at bay when I was nearby. Indecision and confusion of this new life caused him to fear being alone, anytime he was awake he wanted me by his side. Much of the time he was childlike in his clinging which sucked me dry quickly. I cannot explain what it is like really, and you cannot understand unless you have been in my shoes. One minute a needy child, then next a raging monster and I never knew which one I would get or when it would switch from one to the other. It was like walking on eggshells all the time. My nerves were on constant alert for the Dr. Jekyll/Mr. Hyde transformation right before my eyes. Much of what set him off on a rampage was things I did, or didn’t do, or maybe something I said triggered it. Only I couldn’t find the triggers before the explosion went off. There was the time I didn’t do something or another the way he wanted it, and he put his fist through the wall…right beside my head. I don’t have to tell you that the effect was the same as if he had hit me in the face. It was scary, and when the change was sudden there was no time to run or hide. If I tried when he was this angry he would grab me and yank me back into a corner and scream, just inches from my face. Somewhere deep inside him there was something that stopped him from hitting me, most of the time. On a few occasions he forgot that something, but mostly he took to throwing and punching things not me directly. It was like standing face to face with a hurricane and trying to maintain my balance. Nearly impossible.

He wanted to drive, which was not allowed in his condition. It was not safe and I was determined he would not have the opportunity to kill someone with a car. There was a simulated driving test for head injured folks that he took that made his no driving status official (since he wouldn’t listen to me) and he had to pass the test before he could get his license back. Due to the fact he didn’t have permission to drive he was super critical of my driving, and kind of scared at the same time. He flinched whenever a car got near us, which in Roswell was impossible to avoid. When he got scared, he exploded. Sometimes he tried to grab the wheel, and I had to find a place to pull over quickly until his tirade passed. 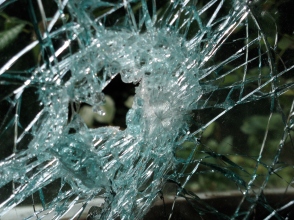 Other times I had to stand between he and the car and say, “No! You will not drive.” He picked me up, tossed me out of the way, I got more than a few bruises from this daily routine. One time he managed to get into the driver’s seat only to realize he couldn’t drive without the keys. He managed to get the keys from me on this day, but couldn’t figure out which one because he didn’t remember how to insert them into the car. He got angry and chased the rabbit me into the house demanding that I show him. I refused and ran up the stairs; he threw the keys at me so hard they stuck into the wall, right as I slammed and locked the bedroom door. In five minutes I heard the TV come on. I got brave enough to open the door and go downstairs. He looked up and said, “Hey, where have you been? Come sit with me and watch.” Totally forgotten was the previous outburst. He never understood where the holes in the walls all over the house came from, or the shattered windshield from an outburst in the car, or the broken items around the house from being thrown.

I hesitate to write about all this because when I read it, it sounds so terrible, and it was. But at the same time there was this scared little boy, who seemed lost much of the time. Who could not figure out what was happening to himself, who was scared and confused, and could not decide on anything because he was so unsure of everything. I had to help him with the most basic things, picking out clothes, figuring out what he wanted to eat, or if he was even hungry. He couldn’t tell these things about himself. There was no self-awareness at all. He thought people were after him…sometimes he even thought I was against him, or in some way trying to trick him. He didn’t like his therapy and vacillated from thinking they were all trying to fool him, to thinking he had no need for therapy. I forced him to go. It was my only break…take him to therapy and go to work at the tea room waiting tables. Not exactly “me” time but it was time away from the craziness that had become my life.

I wish I could say it all got better overnight and that he just came to himself one day, but that is not the truth. The truth is that it was a long time before his mood swings got more manageable. What did happen is that I came to myself one day. I stopped being a scared rabbit (most of the time anyway) and started to stand up for myself. I stood my ground when abusive behavior started. I recognized that he didn’t understand what he was doing, and that it was up to me to tell him. Abuse is abuse even if you don’t remember it.

It was a solitary time in my life, and to survive it I had to cling to God with all my strength…which was very little. I had to put my roots deep in him and had to determine if I truly believed all the things about him that I said I did. I found that much of what I knew, or thought I knew, wasn’t at all true about him. My this-is-what-you-do-to-be-a-good-Christian checklist shrank to nothing. Most of my communication with him was through tears…not even words. I had nothing to offer him, and in that place of nothingness he met me. He surrounded me…really, truth be told, he carried me. I withdrew into the fetal position in the dark of my soul. He met me there. It was the hardest, most beautiful thing that ever happened to me.

But we have this treasure in jars of clay to show that this all-surpassing power is from God and not from us. We are hard pressed on every side, but not crushed; perplexed, but not in despair; persecuted, but not abandoned; struck down, but not destroyed. We always carry around in our body the death of Jesus, so that the life of Jesus may also be revealed in our body. For we who are alive are always being given over to death for Jesus’ sake, so that his life may also be revealed in our mortal body. So then, death is at work in us, but life is at work in you. 2 Corinthians 4:7-12

It would take a lifetime to tell this story completely…or at least a few more blogs. 🙂 Stay tuned because there is more…