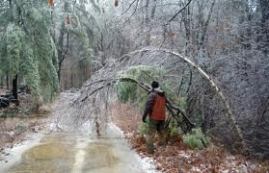 For all my non-southern friends…better known as Yankees…

You laugh at us, heck even I laugh at us, but there is a reason southerners run to the store for milk and bread at the mention of winter weather.  It is the Ice Storm of 1973. I was born and raised in Atlanta.  Therefore I am a snow bird who runs outside at the first flake and does a snow dance in hopes that the snow gods will shower down inches of the white fluffy stuff.   Snow days are play days here in the south and much coveted.  However, in 1973 just like now, we had heard it was going to snow over and over again to no avail. I remember each time waking up and taking a peek out the window with my fingers crossed.  Each time disappointment swept over me when the lawn was bare.  Upstairs, my mom, who had been up in the wee hours watching the news for school closings, was bleary eyed as she got us all up and out for school.  We were lulled into the boy-who-cried-wolf syndrome.  Rarely did the forecasters get it right, and when there was precipitation it was usually minimal. When they said a storm was coming many of us did not believe it or prepare for it.  We knew the drill.  They said winter weather, we got our hopes up.  Our hope was deferred, our hearts were sick.  Off to school we went. 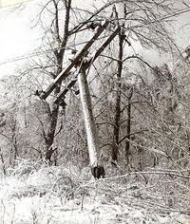 On this week it was no different than the hundreds of times before. (Seemed like hundreds to a 10 year old anyway.) But this time they were right. We got winter weather and in a big way.  South of the city had snow…but we got ICE.  Lots and lots of ice.  Now I think trees covered in ice are beautiful, but you cannot throw ice, or use it to build a snowman.  In fact, once it builds up enough the trees start to fall everywhere on houses, cars, and in the streets.  You could stand outside and listen to them falling all over the neighborhood.  The power lines get covered and they snap, swinging like vines in the jungle, only they are live which creates electrical hazards, while also creating widespread power outages.  Transformers then blow, and while the sparks and smoke are kind of like fireworks to watch, the resulting darkness spreads across neighborhoods like a thief.  The streets are like ice skating rinks and cars that attempt the roads do not get far before crashing into something…poles, other cars, mailboxes, houses…whatever is in the path.  There are no salt trucks or plows.  Roads are blocked or too treacherous to attempt.

Before 1973, I had never known how bad ice storms could be.  To us kids it was a total rip off because you couldn’t play in it.  The first day or two we slid down the driveways on cardboard boxes, until a sliding car almost took me out.  Then we were forbidden to slide anymore. The only saving grace was the icicles hanging everywhere.  We could snap them off and pretend they were popsicles.  School was closed, so I guess that was a plus, but we couldn’t go outside and get wet with no power to dry our clothes.  What is the point of missing school if you cannot play outside?  We were confined to the den with blankets hung over doorways to keep the heat from the fire from escaping down the hallways.  Sleeping bags were lined up in the middle of the floor all scrunched up together like sardines in a can, so we created our own body heat.  The fire had to be stoked all day and night.  Once, in the night, it was my brother’s turn and he stepped on a hot coal that had popped out of the fire.  A screaming, hopping dance commenced and soon all were awake while mom tried to doctor the burn by firelight.  The bathtub upstairs was plugged and full of water, so every few days we used it to take “spit baths” in the freezing cold bathroom, with freezing cold water.  Even the towels were freezing cold.   I had never been so glad to get back in front of a fire in my life. 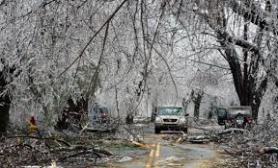 After a week of this our supplies were running low.  I remember my dad trying to make it to the store.  He left and came back without the car which could not grip the ice and so was abandoned in the road.  A day or two later, he attempted it again and this time was turned back when the road was blocked completely by a fallen tree.  Neighbors came together.  The tree was cut up and then he was out.  The only place that was open was a nearby mall where he could get limited supplies.  I think it was almost three weeks before we had power and water.  And what did we live on during this time without stoves, or generators, or ovens you ask?  You guessed it.  So you can laugh all you want, but any time they predict winter weather you will find me running for the milk and bread….and peanut butter. 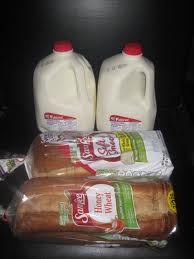