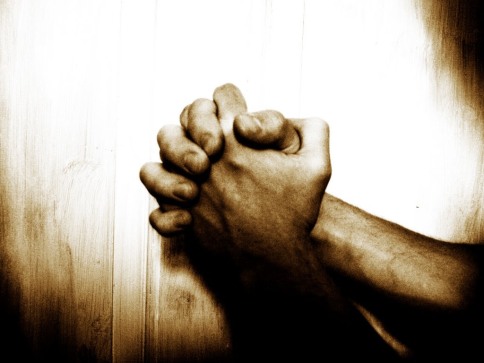 I believe in supernatural healing.

I really do.  I have seen arthritic hands straighten, and injured people walk away unaided after a simple healing prayer.  It was my belief that Bill could walk out of that hospital…that he could just stand up and say, “Let’s go home.”  Only he didn’t.   A couple of days passed and he was still in ICU, still fighting the bonds that held him there.

There was some improvement.  The therapists that came to ask him questions each day noticed it.  At first he couldn’t answer any of their questions.  Who are you?  Where are you?  Why are you here? Who is the president?  What day is it?  None of them.  He could count backwards, and rewind the tape, but that was about it. Then there was the time when he knew who he was, and that he was in a hospital.  And next, the day he knew who we were.  They asked the same questions every single day, and he never got which hospital or who was president correct.  Never.  The questions are designed to find how much memory is lost…to find the window of time that is missing.  The window starts out big, and then narrows over time and recovery.  It is one way to measure healing.

This day the therapist was asking questions and I was sitting praying that Bill would answer them all correctly.  I think in my mind if he knew all the answers then we could go home.  But he didn’t and we couldn’t.  My heart sank, until the last question.  ‘Who won the super bowl?’  They picked that question because the super bowl was one week prior to the accident.  It was the most recent event to try to see what, if anything, from the previous week he could recall.  In typical Bill fashion, he smiled, pointed to his battered face, and said, “Me.  I won the super bowl.”  That broke us all up into laughter, and that appeared to be his intent.  It lightened the day a bit and brought hope that my quick witted, funny husband was indeed still in there somewhere.  It also showed that he was able to improvise if he didn’t know the answer to a question to deflect the attention away from himself and into laughter.  That is a skill that he honed to perfection over the next months in therapy.

While some of the questions being answered correctly was encouraging, they were not the miracle I was praying for.

I wanted the big one…the wake-up-like-you-used-to-be one.  The walk-into-the-sunset-hand-in-hand one.  In Bill’s case I saw numerous smaller miracles, but they were not big enough for my expectations.  His face, which was concave when I first saw him in the ER, was going to require multiple surgeries according to the plastic surgeon. Yet, the next time the doctor came he said Bill’s head must be made of concrete, because the nose was all that would have to be repaired.  He was amazed at the difference.

The CT scan, which they couldn’t get in the ER because the 4 people they had to hold him couldn’t keep him still, was repeated.  I was assured that the bruises on the brain would be significant, but the doctor came in stating that the CT machine must be broken because there was not near the damage that they had thought…that they KNEW was there.  A significant bruise in the frontal lobe, and a smaller one on the occipital in the back, but not near as extensive as he thought it should be.  It was unexplainable to him.  I attributed both these medical phenomena to the prayers going up all over the country.  I had friends call me from other states…one from Florida, the other from California…to say that Bill had come up on the prayer list at their churches.  In the days before social media this network was unheard of but it happened in less than 2 days.

By the third day the waiting room was overflowing with people.

We had also taken over the small chapel next door to the waiting room.  There were even folks in the hallway who had come just to sit and wait with me, but many came from our church because they thought if they laid hands on him and prayed that he would ‘take up his mat and walk.’  I must say I felt pressure.  I felt it was implied that my prayers for my husband were not faith filled enough to bring the miracle, and that unless we had a multitude in the room with him that it would not come about.  I could not allow that to happen, and people misunderstood me.  In their zeal for God to move they forgot how their words could hurt.  They said I had to be bold.  They said I had to not doubt.  They said I had to pray loudly to shake heaven on behalf of my husband.  They decided that since the waiting room adjoined the ICU, and since Bill’s timid wife would not ask for permission for them to go into the ICU, that they would lay hands on the wall and pray.  And so they did.  They shook heaven and earth, and drew the attention of anyone who happened by while they were caught up in the spirit. 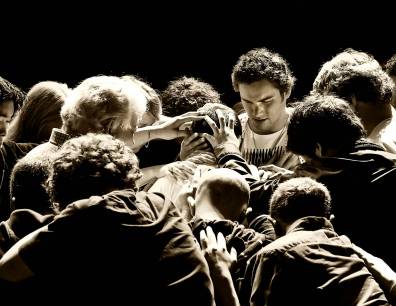 Down the hallway my Baptist family and friends waited in the lobby.  They were praying too, I am sure of it.  The differences in the two groups were stark.  This group was waiting quietly, and knew that we were in dire circumstances.  They had no false pretenses that things would go back to normal.  They heard what the doctors said and they took it all to heart.  They prayed for strength to endure the pain.  Wisdom for the medical team.  For God to comfort me and to help me to deal with Bill’s injury.  All heartfelt prayers, all reserved in their assessment of what God would do or not do, but confident he would do something, somehow.  The groups had no overlap.  There was one or the other. 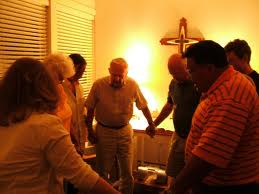 I was a part of both groups, which made me a part of neither.

I went back and forth, to visit and make the rounds of those who interrupted their lives to come and support me when mine had stopped altogether.  I was so appreciative and I knew that despite the differences in approach, their hearts were there to help.  There was no need to let on how pulled apart I felt, and how much I just wanted everyone to be on my page instead of their own.

Our pastor came, I thought to sit and visit.  I was glad to see him.  His wife had been by my side most of the first day and I wanted to express my thanks for that.  After a few minutes he seemed uncomfortable…started talking randomly and I picked up that this was about more than a visit, though I could not imagine what.  It seems, that since Bill could not work in his current condition, and that we had no way of knowing how long it would be before he could, that the church could not continue to pay him.  He really hated to do this, but it was just that the church was in a bad financial place at the moment.  Of course his job would be waiting for him should he get better.  It was just for now.

At the time, I knew his words were true.  The finances of the church were not in good shape due to some members leaving for a newer church around the corner.  We had taken a pay cut just a couple of weeks prior to this in order to try to help as the leadership regrouped.  But here at the hospital, I got it…we were no longer useful.  I smiled and said, “Of course I understand.”  My exhausted, overwhelmed mind could barely process the facts.  My husband is in ICU.  We have no job.

My heart was not ready for such a blow. It felt like a betrayal.

We had given so much of ourselves to the church, worked so hard to build a quality children’s ministry, and we were tossed out at the time we needed them most.  The pain of this event was superseded by the catastrophe of the brain injury.  I was too tired to be angry.  I didn’t argue or say, “What is going to happen to me?  How can I take care of my husband, and go to work?  Could you have waited a day or two?”  It felt so very personal, like my legs had been cut out from under me.  I don’t think I realized at the time how much of a hit this was for me, but still to this day I have a real issue when churches throw away their pastors.

I was in a daze again, floating between waiting rooms and making my visits in the ICU.  Talking with my prayer teams, who had no idea Bill had just been let go.  It was all surreal.  Like a bad dream.  A nightmare really.  I just wanted to go home.  I was feeling out of sorts when I saw my mom coming down the hall with my dad.  I don’t remember why he wasn’t there the first couple of days…out of town maybe? Or at a business meeting?  Wherever he was, he had obviously returned and come to the hospital.  My heart leapt even as my eyes filled with tears.  None of us could speak.  There was only the hug.  The embrace that I melted into, that undid me, that allowed me to break.  No words were needed.  Nothing mattered and for a few minutes I felt the load lift from my shoulders.