I had a meltdown this week.  Allow me to give you some backstory.  Five or so years ago, we began caring for Bill’s dad, Ray. In that time, we have moved him 4 times, handled some very complicated legal matters, managed all his doctor and dental appointments (and the dog’s vet appointments), gotten his estate in order, and been there for his day to day needs.  All of this has been on the heels of doing the same for Louise for 3 years before she died.  Anyone who has taken care of an aging parent knows what I mean when I say, good days are taxing and bad days are utterly exhausting. The cumulative effect of the past several years has taken its toll.

In addition, the kind of stress we have been living under has effected Bill’s TBI brain negatively. When he is stressed his neuro fatigue increases.  What that means is he can be going through a day as normal, and then, seemingly out of nowhere, he cannot function.  The only way to reboot his brain is for him to sleep.  It doesn’t matter if there is a crisis going on around him or it is a normal day, he simply cannot process information.

Just before a shut down, he is in overdrive.  He talks faster and louder than usual.  He verbally processes everything with everyone. His brain is frantically trying to take in and comprehend the situation.  It requires a tremendous amount of mental energy to function in crisis mode, and to some degree, we have been in that mode for a several years now.

Our current situation is that Ray has been transported to the hospital by ambulance 3 times in the past month or so.  The first time, he pushed his panic button when his arm and hand started tingling.  The second time, a friend went to see him and he couldn’t speak.  His blood pressure spiked to 207/155 and the assisted living staff called the ambulance.  Those two visits to the hospital resulted in tons of tests, all of which came back normal. The conclusion is that he is having TIAs (mini strokes) which are affecting his brain function.

The third trip to the ER came while I was in Atlanta for work last weekend.  They called us at 1:00 am to say Ray had been outside walking his dog when he fell in the parking lot and hit his head on the concrete.  Thank God he didn’t break any bones, but his head was banged up enough to spend about a week in the hospital.  Again, confusion caused him to not realize it was midnight when he went outside.  Again, the tests showed nothing wrong.  Again, we were at a loss as to what to do.

I must say, I do not like hospital living.  Driving the 40 minutes each way, sitting in a room trying to work, while also feeding and caring for Ray is hard.  Trying to figure out what is the best thing for him is hard. Watching Bill try so hard to process it all is hard.  Being the information gatherer and processor is hard.  Doing all of this while trying to work full time, run my tutoring business, and co-care for my mom and dad is hard.

One day last week, Ray was delusional.  He was agitated.  He was being difficult. His behavior was all too familiar to me and it triggered some past trauma of mine from when Bill was injured all those years ago.  There came a moment when we were waiting for a nurse to get Ray up to go to the bathroom, and he said, “I can do this by myself. I don’t need you or the nurse.  Just leave me alone.”  My anger was instant.  All of the hours spent caring for him and he just blew it off. I realize, of course, he was confused and his brain wasn’t operating normally. Mine wasn’t either.

I didn’t explode, but I did get up and firmly say, “I am so glad you don’t need help.  I will be leaving now.”  I walked out and promptly began to weep.  I was just trying to get out of the building when it hit me how much I needed my mom.  Only my mom is now about 3 years old. I needed her to say, “People have no idea the difficulty of your day to day.”  I needed her to wrap me in a hug and say, “It will be okay.” With tears rolling down my face, we told the staff we were leaving and as we turned the corner towards the elevator, we heard the chair alarm go off as Ray tried to get up to get dressed and walk home. 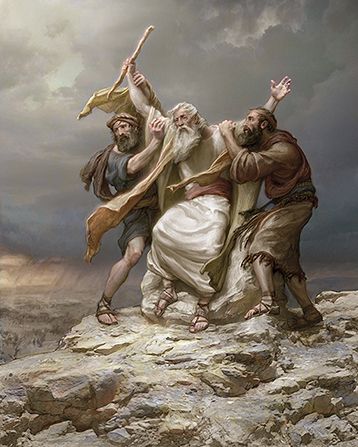 For the next 24 hours I was a basket case.  Any attempt to talk resulted in a flood of tears. I was literally at my end, but then the most amazing thing happened.  My Aaron and Hurs showed up.  If you don’t know the story in the Bible it is in Exodus 17.  There is a battle going on in the valley. Moses is standing on a hill overlooking the action with his hands lifted to God asking for the victory.  As the battle goes on, his arms tire but when he puts them down the Israelites begin to lose.  When he puts his arms back up, they begin to win.  Physically he cannot continue to hold them up and that is when his brother Aaron and friend Hur show up to lift his arms for him.  With their help, the battle is won.

The battle in front of me was being lost.  My arms were tired.  My whole being was tired.  I could not keep going, but then a friend encouraged me to hold on to my health even though I couldn’t control my circumstances.  Then some powerful women at my office gathered around me and prayed powerful prayers.  Then my sister turned her car around and pointed it towards the hospital. They showed up.  My Aarons and Hurs.  They held my arms up and they haven’t stopped.

My sister talked to the hospital, the case worker, and the assisted living staff.  She advocated for Ray and Bill, but she also advocated for ME.  She explained why they had to make it work to get him back to where he was or to memory care rather than our house. She told them how much effort it takes for Bill to function in stressful situations because of his hidden brain disability, and how I have to be there for him as well as Ray which means I need support.  She held my arms up.  She stood up for me…and then she took me to dinner.

Afterwards, we went for a hike around the lake. About half way around my legs were weak, and my fake knee didn’t work properly.  I took a pretty hard fall that knocked the breath out of me.  I laid there crying in the dirt and I said, “What else?  What else can go wrong?”  Almost immediately there was thunder overhead which brought laughter as we decided that wasn’t the best question for me to ask.  Melinda got me up, checked me for broken bones (thank God for family nurses! Can I get an amen?), and then got me walking again.  She literally pulled me up by my arms.   The two of us have learned, after walking our Aunt Betty to the gates of heaven and closing her estate, that we need each other.  We have learned, as we walk our mom and dad through their last years, that we have to hold one another up sometimes.  It has been a gift to know she has my back and I have hers.

I hope you have some Aaron and Hurs in your life.  It is so important to know that when you are at your end, they will show up.  They will stand up.  They will hold you up. So, if you have been wondering why I haven’t written much lately, now you know. As my sore body recovers from my fall, I am trying to rest as much as possible, but we are not done by a long shot.  Some of the hardest decisions we have to make are coming next week, which most likely mean moving a man who doesn’t want to move to memory care.  Pray we will have the stamina we need and that cooperation and understanding will prevail.  Your prayers hold my arms up and you will never know how much that means to me in this season.