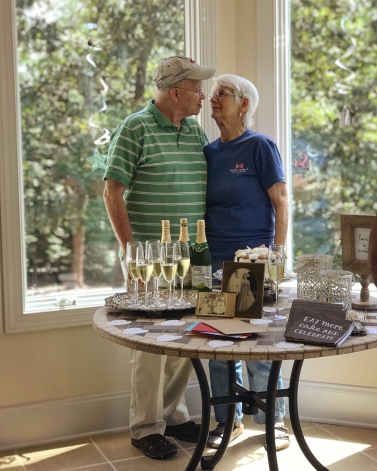 I had the privilege of being raised in the overflow of True Love.  My parents set an example, which has inspired me on the toughest days of my own marriage. Their relationship started when she was 13 and he was 16, and going steady was the way things were done.  Their young love never wavered from that path, growing steadily until they eventually married.  If you look back in time, which we did last weekend going through slides from their courtship, it is evident from the sparkle in their eyes how much they loved each other.  You can see it as she pinned him at his commissioning ceremony.  You can see it in pictures of the two of them at a picnic. You can see it in the wedding photos, and in their young hope-filled eyes on their honeymoon. You can see the sparkle of love in each stage of life along the way.  If a picture paints 1,000 words, then boxes of pictures paint a lifetime of words that can be summed up in three…I love you.

Notice I didn’t say theirs has been a perfect love.  It has not.  They bicker.  They have their differences of opinion.  Their personalities sometimes rub each other wrong.  But in the tough times, the sharp edges have worn off leaving behind a gem which is even more beautiful than it was in the very beginning.  It is a love formed by decades of shared life, and now is needed more than ever before. As Mom’s memory begins to fade, Dad has to step in more and more.  It is a role reversal for him.

If you know my Dad at all you know that patience isn’t his thing.  He is a go-getter, type-A.  Work is his love language.  Getting things done, in high quality and as quickly as possible is his measuring stick for life.  We have called him the bulldog, because when he gets on a task he doesn’t let it go until it is accomplished. That pertains to our tasks as well.  He is laser focused, until we finish what we start.

Mom is the nurturer.  She is the slow-down-and-smell-the-roses to his full-speed-ahead.  She is the color to his black and white.  She is the one who had the insight to know he needs a task to be happy, so she signed him up for photography classes as he neared retirement to give him one. His beautiful photography is the result of his hard work, but it started with her intuition. Her wisdom is carefully thought through, her roots go deep. She is the encourager of the family, which glues us all together.

To see Dad slow down to take care of Mom, is one of the most beautiful things I have ever witnessed. The way he lets her go at her own pace. The way he helps her when she can’t find words.  The way he plans things so she can still do the things she wants to do.  He is becoming her memory.  It is amazing to watch him be patient, when I know that is the opposite of his natural tendency.  And even though sometimes her eyes look confused, when she looks at him the sparkle rises to the top.

Growing old together isn’t always the fun we all imagine it to be.  It isn’t all rocking chairs and grandchildren circled around.  In fact, the more I watch, the more hardship I see in the “golden years”.  Yet, even through all that aging brings with it, I am still living in the overflow of True Love. It is still an inspiration to watch my parents love each other well.

Today they have been married 60 years, which was proceeded by several years of growing up together.  They have been together so long they are bonded together and even their bickering is cute and sweet.  In our culture, 60 years is a milestone of significance, but in our family, there was never a doubt they would make it this far. Their love is deep enough to weather storms and wide enough to keep all of us in its embrace.  True Love is like that. It spills over and rains down on all those who come into contact with it.  I have lived in its mist my whole life and I will be forever grateful to my parents for their True Love.