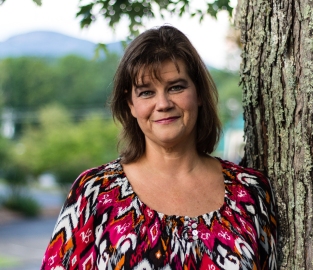 A beautiful fall day calls for…housework, right?  Maybe.  Just a little.  Then a drive through the brilliant glowing mountains, as a reward.  Bill was changing lightbulbs on the outside of the house in preparation for the darker evenings.  I was inside working to ready the guestroom for any visitors coming our way.  Bill was on a step stool which wiggled underneath him and bucked him like a bronco.  He went down on his back, hitting the corner of the concrete slab of the driveway.  Without his phone, he had no way to notify me of his plight other than to crawl into the house with screams and groans, which brought me running.  I found him face down in the floor writhing in pain, unable to tell me much other than he fell.  As he was pointing to his back, I did an assessment of the situation to determine if an ambulance would be necessary.  I found scrapes, but no bruises.  However, he is notorious for not bruising easily, so that meant nothing.  I grabbed the ice pack and plopped it on the area of concern.  When he got some of his breath back, he told me both his elbows where hurting.  We determined he had somehow put them behind him in trying to catch himself.  Both were scraped and bleeding and required ice as well.

He attempted to turn over onto his back and for the first time I saw his face.  His eye was black.  To me, in that moment, all my world got what I call fear-foggy.  I forgot the back and elbows and immediately asked where he had hit his head.  He insisted he had not hit his head.  However, since he does not bruise, for his eye to be black already I knew he must have really done a number on his noggin.  I was checking for bumps or knots on his face.

I questioned, “Then why is your eye black?”

I could feel panic rising in my chest and had to take a few breaths to bring some calm into my fear-fog.  I reached up and wiped at his eye, and removed his black eye.  It was dirt.  My relief was instantaneous.  I even laughed a bit at my concern over a dirt smudge.

I shifted my focus to dealing with the back, which by now was improving pretty rapidly.  He was able to sit up slowly and move, breathe, and twist.  His elbows became increasingly sore, but the back seemed okay.  He managed to stand and I got him to a chair.  Once he realized his back wasn’t broken and he could bend and straighten his arms, he took me outside to where he had fallen.  I have to tell you, it is a miracle he didn’t break his back.  Truly.  The concrete edge he fell on should have snapped his back in two.  I cannot explain to you how scary the whole event was.  But I can say, it showed me something significant about how our pasts effect our present.  The fear-fog that came over me when I thought he had hit his head was immediate.  I could deal with a possible broken back, or a couple of broken elbows…but just the thought of another TBI put me into a panic.

Which made me wonder…what things in my past are still fresh enough to interrupt my thought processes and create a fog?  What fears am I unknowingly living with day to day?  The most obvious ones, cancer and TBI will probably always be in the back of my brain somewhere waiting to jump out on days like yesterday.  But what of the others.  Are there others?  In moments which can be life defining, is fear bigger than life to me? I am aware of how things can change in one heartbeat…an instant.  I am also aware God carries me in those times of crisis when I cannot even think straight for the fog. Fortunately, yesterday Bill was spared any significant injury.  He tossed and turned last night in his sleep, moaning and groaning at the pain in his elbows.  This morning he still insists he is fine and no x-rays are needed.  We will see about that. 🙂 My heart is grateful beyond words that miracles still happen, and in a frightening moment yesterday, we were recipients of one.

8 thoughts on “A Frightening Moment”