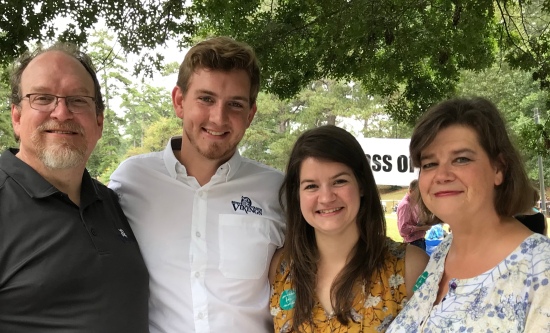 At my alma mater, Berry College, we have a tradition called Mountain Day which is sometimes difficult to describe.  When asked, “What is Mountain Day?” I usually just say it’s like homecoming, because it is easier than giving a full explanation. Martha Berry, the school’s founder, had her birthday on October 7.  The celebration all started back in the early 1900s. The poor mountain students wanted to give Martha a gift for her birthday, but they knew she wouldn’t accept a gift for herself.  Instead, they each gave the number of pennies of their age in a basket as a scholarship for other kids to be able to come to Berry. That was a big deal. The students wore uniforms back in those days; women in pink and men in blue.  The seniors had the designation of women in blue and men in white.  They gathered at Lavender Mountain and marched down the hill to present Martha with their pennies.  After the first trip down the hill they marched back up to meet up and march down in pairs.  As the band played, they did this trip three more times until they were 16 across for the final march down and the singing of the alma mater.  Martha was presented with the basket of pennies and there was great celebration.  The day at the mountain has continued to this day.  In fact, it has expanded to include the entire first weekend of October each year, with Mountain Day Olympics, a talent show, a chapel service, a picnic, a Marthapalooza fair with carnival rides, and class reunions from previous decades.  Unless you went to Berry you probably can’t fully understand this rite of passage, but it brings all students, former to present, together to celebrate the heritage of the school and its amazing founder.

This past weekend Peter was wearing white.  His senior year.  All those previous years of marching up and down the hill came to fruition in this last march. Next year he will be on the sidelines with the rest of us who have marched that hill before him. He will not be dripping with sweat, or huffing and puffing, but he will go back with fond memories to meet up with friends and reminisce.  He will have a new appreciation of the traditional event and its ability to bond all generations of students and their families.

This past weekend it was also Hannah’s 5-year reunion.  We were sad she was going to be unable to come the distance from Seattle for the celebration.  Unbeknownst to us, she hatched a plan.  She and Peter conspired to surprise us with her presence.  Bill and I were in Atlanta at an event and had planned to go to Rome for Mountain Day from there.  Peter knew the hotel we were at and Hannah had contacted someone at the event to get our room number.  At 6:30 in the morning I thought I heard a knock at the door.  I was sound asleep so I kind of dismissed it as a dream.  I heard it again and woke enough to listen more carefully, but was still unsure if it was our door or the one next to us.  I got up and looked through the peephole in the door.  No one was there and I thought I had imagined the whole thing.  I started to head back to bed, when another knock came.  Definitely our door.  Afraid to open it without knowing who was there, I asked.  I heard a muffled voice, so I asked again.  I still didn’t understand but it was a woman’s voice so I took a chance it wasn’t a crazed killer and opened the door.  “Surprise!” I was stunned to see Hannah and the squealing began.  I pulled her into a hug and drug her into the room.  Yelling for Bill to wake up and ‘look who is here!’  It was a wonderful surprise!!  We got to ride up to Mountain Day together and spend time with Peter on his senior day, the two of them laughing at their successful ability to pull one over on mom and dad.

The class of 2012 banner was strung between trees at the picnic. Hannah found her friends there and surprised them too!  No one else knew she was coming either, except for those she was staying with for the night. She got to see all her former roommates and catch up.  It was a whirlwind, last minute decision on her part to come to Georgia for 24 hours, but it was worth it to be with family at a significant event and to see her friends…all in one place!

Generations of students and their loved ones were able to participate, either marching or watching, as the students marched up and down the hill. Hurricane Nate even held off so the march was able to be completed in the sun and humidity…haha.  This year, Peter’s senior year, my heart is full. 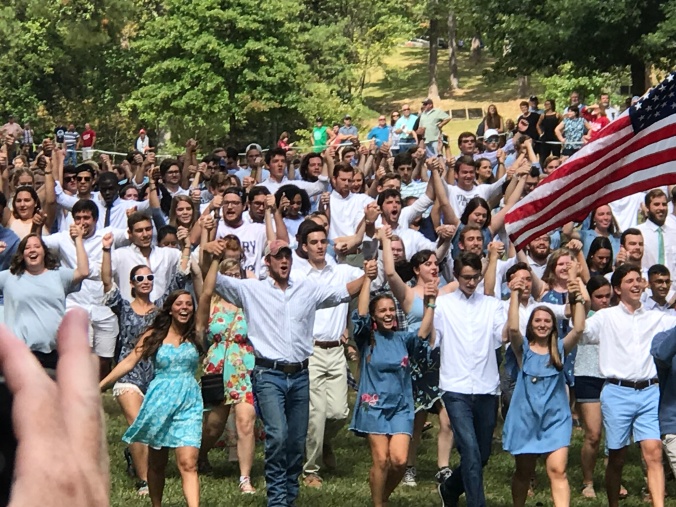 5 thoughts on “A Lovely Surprise”