Hopelessness-a state of being without hope.

There is something rising up.  It is crying out with a loud voice.  It is the sound of pain.  It is the expression of deep wounds that are festering.  It is brokenness, manifested by anger.  If hope deferred makes the heart sick, then our country is heartsick.  We are finding that if you put hope in a government, you will be disappointed.  If you rely on people, they will let you down.  If your heart looks to another source for rescue, it will be broken.  Every time. Grief over the loss of hope is torturous.  It brings sorrow, torment, and distress. The pot of anguish simmers and then boils over, spilling out into the streets.  It is a lament over the failure of men, and if that is the only hope you have, it is devastating.

In the midst of gut wrenching pain, there is name calling.  From every direction. Every social media post, every conversation is filled with poisonous words spoken over the “other side.” Pride has even taken hold of the bride of Christ. She is splintered within herself.  She will not bow in humility.  She does not see the damage she is doing with her words.  She cannot feel the heart of God breaking at her actions.  She only wants to make herself heard.  She has aligned herself with BOTH conservative and liberal. The arrogance that spews from her is masquerading as caring, but it is only words.  Arguments. Pointing of the finger. Accusations. None of it is bearing fruit.  None of it.  There is only division.  Confusion. Self-righteousness.  Who does this most resemble?  Not God.

When someone is trapped, or wounded, God does not heap insults. He does not try to humiliate those who oppose him, he tries to woo them.  He does not criticize or demean.  At least he didn’t for me.  He has never been harsh with me.  Even when I was lashing out. He is gentle with wounded hearts and with stubborn ones. I have had them both. He knows to heal them they must first be open to him.  For that to happen, there must be trust.  He has spent the past 2,000 years proving himself trustworthy.  Yet, humans are still suspicious.  They still do not fully embrace his sacrifice.

Without evidence, skepticism runs high.  The Pharisees still exist and they get all the press.  Front and center, they point out how unrighteous or idiotic or foolish or unwise everyone else is, and how they are the ones with the truth, as if they know better than others.  Their eyes are blind to the fact that the mind of a Pharisee lives in ALL of us.  Yes, I said all.  I should know, I am one of them.

There are so many deep wounds in our country that we are in self protect mode. We are defensive as a people.  Instead of protecting and covering one another, we are pulling scabs off of those we consider our enemies and poking the wounds with sticks.  In the meantime, believers are unaware that we are the evidence the world is looking for.  We are the proof, or not, that God is trustworthy with broken hearts.  At this point, I would say there isn’t much evidence, to prove beyond a reasonable doubt, that he can be trusted with the pain that has taken hold of our country.  The hope everyone is looking for in the government lives within us, hidden under layers of self-righteousness.  It cannot shine out as a beacon until we bow our knees and lay our hearts open for surgery.  We need a self-ectomy.  Only then will our eyes be open to see the pain around us that so desperately needs healing.

I look in the mirror and wonder if I was called to the witness stand to testify of the hope of Christ and if my words were used as evidence, would he be found guilty or innocent?  Would my testimony let him go free or crucify him?  I cannot say for sure, but I think the verdict would not be in his favor.  My mouth does not always speak life.  Sometimes I utter fearful words, or hurtful ones, or no words at all.  It grieves me to recognize my heart is still so far from his.  In this difficult time in our country, where hope is needed more than ever, I don’t want to be one who adds fuel to the hopelessness.  Once again, I have a log in my own eye. Once again, I bow my knee. Once again, I need his grace.  Once again, he offers it freely.  Once again, hope rises. Now to give it away… 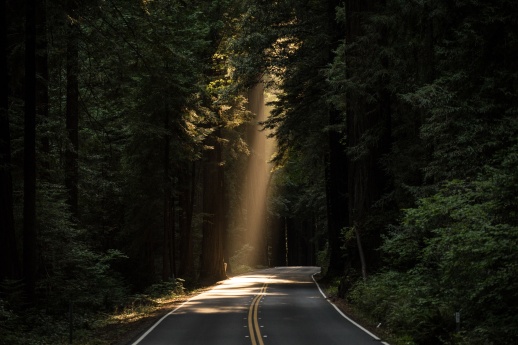