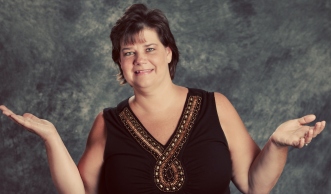 My lazy day at the pool was interrupted by laughter.  I opened my eyes to see a brother and sister with a friend or two playing in the water.  They were somewhere between 6 and 10, and so full of energy that only a day of pool play would quench it.  And play they did.  Categories was the first game, and while I reached back into my memory banks for the rules of the game, they engaged in the ‘favorite ice cream’ round.  There was some rather loud discussion as to whether Brother was turning prematurely to cheat.  Ultimately, he promised to remain with his back to the pool and the game continued for two more rounds before attention waned and the next game began.

The cannon balls, pencils, and can openers commenced with a full panel of judges calling out scores for each plunge into the depths.  The esteemed evaluators were dripping wet as they watched and waited for their own turn.  They appeared to be judging on creativity as well as execution and once again, there was loud discussion of each attempt and subsequent addition of total scores to determine the winner.  The game was abandoned when one particular “run-freeze-like-a-statue-then-fall-in-the-water jump was ruled against procedure by the judges but deemed the “best” one by the contestant.

I leaned my head back against my chair, closed my eyes, and traveled back in time just as the first call of “Marco!” rang out.  The corners of my mouth creeped up my cheeks in a smile of remembrance and a bit of mischief. The hours and hours of pool time flooded my mind and I allowed the pictures of my own children to surface from the deep places of my heart.  Little brown bodies and hair of varying shades from white blonde to chestnut brown.   Multi-colored googles, board shorts and bathing suits, an entire rainbow of pool noodles, towels hanging over fences, snorkel gear, and diving coins, sticks, and nerf balls.  My imagination carried me into a poolside sleep and I woke to smooth quiet water, wondering if I had dreamed the whole earlier scene. 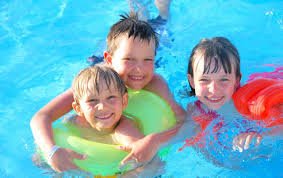 Another day, a different pool, same games, different kids…6 of them this time.   Two moms, 3 kids each, poolside, watching every move. I so remember these days.  The kid age range from 4 to 10 or so.  Younger boys beyond excited that they graduated from jumping in at the 4-foot mark to the 5-foot mark.  The youngest one gleefully says, “That is so fun!”  I giggle since the new launch pad is merely inches from the previous one.  His skinny little body shivers in equal amounts of excitement and fear to be in the ‘deep end.’  The first tentative jump gives birth to more and more confidence, until he can jump, turn, and swim back to the ‘shallow end’ without holding onto the side. His brother and friend are right behind him in the jumping game, and while they are not old enough to start scoring one another yet, I know that it will not be long until they make it into a competition. It’s a boy thing.

The girls have left little brothers behind and are making silly hair styles with their wet manes.  Being older, they have the full pool at their fingertips but choose to stay in the deeper waters where younger siblings cannot follow.  Silly faces are made under water which bring giggles above. 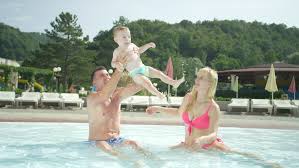 At the other end, a dad hoists his boys into the air high enough they land in cannonballs all around.  This creates gleeful screams and choppy waters.  I hear the familiar refrain, “Again.  Do it again, Daddy!”  I want to tell the dad that his back will be sore tomorrow, but I figure he already knows this. I’m not sure he knows how significant this summer custom of pool-going is.  That there will come a day when the lessons learned in the water will translate into real life. That relationships formed here build trust, teamwork, and toughness.  That a day this exhausting has meaning and provides something more than fun.  He may not know all that now…but there will come a day where he will see it all clearly, from the side of the pool.

I take it all in and once again I flashback to the time when my kiddos were little.  Something about the smell of sunscreen, the sight of freckled noses, and sounds of laughter make my heart somewhere between melancholy and amused.  Melancholy because I miss those days of little poolside footprints.  Amused because I now get to observe without the exhaustion of keeping up.  Still, if there is anything I have learned, it is to cherish the season in which you find yourself, because you will blink and it will be gone.  For all the young moms and dads out there…hats off to you.  I know it is beyond tiring, but this summertime ritual is a wonderful thing.  One day, when they are grown, you will take a well-earned poolside nap, smile, and be tempted to yell, “Polo!” while pretending to be asleep…just for fun. 😉