I recently witnessed a startling phenomenon. A little background first. A woman with a child, a baby really, sitting talking baby babble. I used to do that with my own and so I know the age of the child is somewhere between 6 months and a year. It always amazes me how moms intuitively know what their children need. Even at this early stage we babble with our babies and think we are just having fun, not realizing that this game we play with them develops their language skills. The infant is all smiles as the mother focuses in on trying to change ‘da, da, da,da’ to ‘ma, ma, ma, ma.’ All moms do this because it seems ridiculous to us that after all those middle of the night feedings that their first attempt at language is da da. 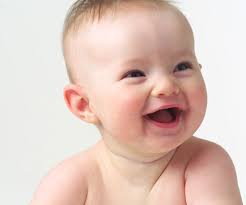 The baby, dressed so that I cannot tell if it is a boy or girl, is just happy to have someone making noises. The dark flyaway hair is like corn silk, baby fine and floating in fluffs. The beginnings of curls at the ends tell me that it is virgin hair that has not yet been cut. The pudgy cheeks are still squeezable and have not begun their thinning. Brown eyes sparkle with life and laughter. This age is after what my husband has termed the “blob” stage…eating, sleeping, pooping…when the personality begins to take shape and shine. It is where they begin to interact with the world around them…taking it all in. Most of the laughing baby videos you see on the Internet are taken during this stage, because babies love to laugh. They have not yet learned to hold back, and this is why we smile when we see them. We remember. Maybe not consciously, but when we hear it our souls remember and it makes us laugh with them.

Babies are trusting without even knowing they are doing it. They are totally dependent, and yet beginning to know their independence…their separateness. We babble away, and tickle, and retrieve items from their mouths as they explore their world. We stand guard over their innocence, and wipe the teething drool from their chins. We are exhausted, but happy that they are happy. We celebrate their growth and every milestone becomes something to make note of in the baby book. First teeth. First crawl. First word. First step. We are meticulous at documenting these things because we want to remember and cherish their childhood.

I notice the mom putting her baby down onto the floor. She stands the child, (I now know is named Joseph) up and begins to ‘walk’ him around the waiting room, which he loves. But here is where things get odd, the mom tries letting go so he can walk on his own, but his little legs are not strong enough for that yet. He plops right down. She stands him up saying, “Stand up for mommy.” He plops down again. If it had been one or two times I would have thought nothing of it. But the more he falls the more anxious she becomes and the more tries she makes. I lean in and tell her how cute her son is, trying to ease her frustration. She goes on to tell me how concerned she is about his lack of ability to walk. I am stunned and assure her that walking is not something babies do at 6 months old on their own. She insists that he must walk, that the very reason she is here at this doctor’s appointment is for her son to be evaluated. He will be measured by comparing him to other kids his age and by his ability to walk independently.

After this conversation, I notice 2 other moms in the waiting room both working with their kids. One is repeating sentences over and over to her 3 month old, trying to teach him conversation. The other is giving her 5-month-old daughter a toy hammer and telling her which shapes to hit on the little workbench. All three moms are insistent that their children do these tasks.

My name is called and I retreat from the waiting room, confused by what I have seen. I ask the nurse if the doctor is actually measuring babies in this way. She confides in me that he does measure them as I had been told, even though he knows it is developmentally inappropriate for babies to do these tasks. I ask her why and she says it is required of him by the state, and that those who decided on the measures are not doctors therefore they do not understand that babies cannot walk, talk, or pick out shapes at those ages.

I was hoping I would wake up and find this all a dream, but I had no such luck. Turns out, this is what is going on in every school in the state. By now you may have guessed I did not actually see these moms at a doctor’s office. I told the story because I was trying to make a point by showing the absurdity of forcing children into tasks that they are not developmentally ready for. Would you make a 6-month-old walk? Or a 3 month old speak in complete sentences? Would you measure kids against each other? Or put pressure on parents to make sure their kids performed in order to be considered proficient? It is what our state has deemed the right thing for kids. The experts haven’t been consulted and their hands are tied, despite what they know to be true. So instead of notating milestones in photo albums, parents and teachers are preparing our kids for the Milestones test and praying that they pass. Ironic don’t you think?

I write about all kinds of things…things I am passionate about.  One of those is education.  Follow, like or share to keep up with my latest musings. 🙂