Splat! My foot hit the carpet at the bottom of the stairs and was in a puddle. Not the way I wanted to start my day. I was flummoxed. Where does a puddle come from in the MIDDLE of a basement floor? Was it the dogs? The kids? Clean up commenced, and I went about my day. The next day, splat, the puddle was back. Now suspicious, I asked the household what was up, but no one seemed to know.

Bill checked the utility room and found nothing…the first time. The second time he checked a day later, it was filled with water. (Still not sure how he missed it the first time) Having just had three cars repaired in a week, we prayed fervently that it was NOT the hot water heater, but rather something inexpensive that was causing this water to flow from the utility room to the middle of the basement floor. I know… it was a far-fetched prayer, but due to our amazing faith (tongue in cheek, here) God answered! A small leak in the pipe caused the whole mess, but was an easy $100 fix. Whew! We dodged a major bullet. We quickly thanked God for his answer, vacuumed up the water, and left town for the weekend. 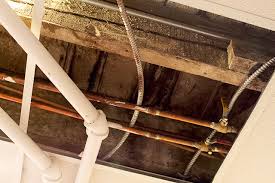 Upon our return on Saturday evening, I was walking through the dining room when, splat! My foot found another middle-of-the-room puddle. I felt my heart sink. I knew it was too good to be true to get out with such a small price. So much for my great faith! Again, the search from dogs to kids. Again, no response on the culprit. This spot was under a place in the ceiling we had had a leak before. So I sent one of my boys to the attic.

“No water, mom! All is dry.” My mind was incredulous. This could not be.

“There has to be water, where else could this be coming from?”

It dawned on me then that maybe it was underneath. A pipe under the floor perhaps? Odd placement, but I guess a pipe could have burst….and water flowed up? Sprayed up, against gravity, maybe?

“That would explain the spot on the ceiling downstairs,” says the son.

“There’s a spot on the ceiling downstairs?” I ask.

“Yep. Right under this.”

I called the plumber. We filled the tubs and sinks and turned off the water main…just in time for our houseguest to arrive. Fortunately, she is a world race alumnus and bucket baths are familiar to her, as is flexibility. I was grateful we still had a bed to offer her. Just so happens our plumber is also a preacher and so we had to wait until Monday for him to arrive to rescue us. Two days without water taught me an important lesson…I could never do the World Race, I love showers too much. 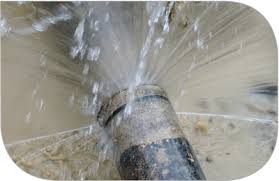 Somehow, even with the water off, the puddle grew. The spot on the ceiling downstairs spread. Water fell into the utility room…again. Once again, fervent prayers went up for an easy fix. Once again, the $100 answer came. A leak in the refrigerator line…fixed in a few minutes. Once again, fans and vacuums. And all seemed well. Then the small gnawing voice in my head that whispered, “You should get that checked to make sure. To prevent mold. To make sure there is no rot.” The voice won and I called the water mitigation company. It’s a good thing I did. The entire subfloor under the flooring was saturated. It spread out throughout the kitchen and into the dining room. The insulation in the ceiling downstairs was saturated as well. So much for an inexpensive fix! Insurance will cover all but $1,000 of it, so at least it will be correctly done before it is all over.

The water company brought in their fans, dehumidifiers, and air filters just in time for our houseguest, who had left for a week, to return. God bless her…she is a trooper. They pulled up the floor, tore down the ceiling, and peeled back the carpet. Then they sealed off the dining room and kitchen from the rest of the house with plastic that runs from ceiling to floor. It looks like a hazmat area and sounds like a wind tunnel. The basement has the same appearance.

Did I mention that I am doing the Whole 30 diet? Yes, that’s right. The one where you have to make everything you eat, from scratch. All your own condiments, dressings, butter…from scratch. I am on day 10, still in detox stage and these events in my house are NOT HELPING ME!! However, I cannot turn back now, so I bought a cook stove that should get me through until my kitchen is restored. My plans have been interrupted.  Funny how it always  happens that way.  Sometimes unexpected interruptions turn out to be important to your health.

So I have been thinking, as you knew I would. We have been through fire, wind, and now water. I am praying we never have to go through an earthquake. (You can rest easy, if there is one it will be limited to just our house I am pretty sure.) The lesson this time? Things can look pretty good on the outside. It can appear that all is well, but when you peel back the layers and look behind and under there is more than meets the eye. Things that will rot, mold and mildew. Things that you didn’t know where there. Things that can destroy if they are not addressed. You might suspect there was always something not quite right. That there might be an issue that has been there a long, long time. A slow small leak. Something that you are afraid to uncover because of what it will cost you, but it is best to go with the process. It exposes the things that thrive in the dark to the light and breath of God’s love. It is messy to be sure.  It interrupts your plans, takes some time, some rethinking things, and some rearranging, but in the end ALL THINGS ARE NEW. The relief and lightness of restoration, the rest and peace when it is all completed is worth the all the mess and trouble. I can tell you that truthfully. I have done it three times now in the natural on our house… and hundreds of times spiritually. What is coming is so much better than what is hidden behind you, but it takes removal of the damage first. It’s time to call in the professionals.

2 thoughts on “The Flood”