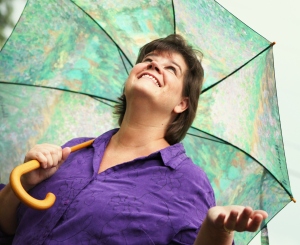 Last night, on the 4th of July, Bill decided he wants to see fireworks somewhere. After a very animated discussion (that means argument in case you didn’t know), we finally agreed to take the dogs with us. I wasn’t willing to leave them home in the yard, since there could be people shooting off their newly legal purchases at close range. I wasn’t willing to leave them in the house with left over cookout food in the trash cans and remains of a party on the counters and tables. Plus, I reasoned, we could take them on a walk while we were out and they could do their evening business. Gracie is having some house training issues and walking her usually does the trick. So I put my foot down, because I can be a stubborn woman. (You are shocked I know. I can hear you gasping.)

So into the back of the Jeep the dogs went…against Bill’s will. As we drove along the mountain roads, he opened up the sunroof and the windows to listen for the booms. It was a glorious 69 degrees. Dusk was settling into dark. The Katydids were singing, and the tree frogs were tuning up to join in the chorus. The wind was blowing in my hair, and it could have been a beautiful ride, but there wasn’t one boom. We could not see any fireworks anywhere, which was of course because “I had to delay in order to bring the dogs.” It appeared that the heated discussion had caused us to miss the fireworks…I was in the doghouse so to speak. A chilly silence ensued. I know that none of you ever have heated discussions that turn into stone cold silence…but try to use your imagination. 😉 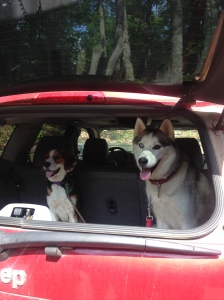 We made our way stealthily along, using the back way into the side streets of Helen where you can sit in your car and have a view of the fireworks…without the traffic or the crowds. (Shhh, don’t tell the tourists.) We thought we had missed fireworks but then we heard the noise…with our dogs smiling safely in the back of the car, I might add. The color was beautiful like a golden willow dripping down from the sky and soon the chill in the car faded and we enjoyed the show. We never even had to take the dogs out of the car. They were safe and never paid much attention to the booms and commotion. After the grand finale we headed back out, as quietly as we entered, feeling very sneaky that we got a great show without having to endure any hardship. I turned out to be right about bringing the dogs which had me in a great I-told-you-so mood. All that was left was to stop along the way home and let them have a little walk. Then my extremely sensitive sense of smell kicked in. (My kids call it my super power.) “Oh, no,” I said, “Pull over! Quick!” Bill confused said, “What? Why?” I continued to insist because my nose told me that Gracie had pooped in the back of the car.

We stopped. In the dark. On the side of the road. In the tall grass. Opened the hatch and sure enough…poop everywhere. The dogs covered in poop. The leashes covered in poop. The Jeep covered in poop. And let me just say this was not good for my I-told-you-so mood. I corralled the dogs while Bill tried to clean out the back with a couple napkins from Wendy’s. The dogs finished their business on the side of the road and then proceeded to crisscross the filthy leashes all around my legs so that, soon I was covered in poop too. Nothing like a disgusting smell on your hands, legs, clothes, and in every breath you take to humble you. We had the windows down the rest of the way home for completely different reasons than when we started out. Once we made it home and got the dogs settled…and after showering and doing a bit of laundry, we enjoyed listening to the storm and torrential rain the rest of the night. This morning we slept in to the sound of steady pouring rain. It wasn’t until around lunchtime that we ventured out to discover that when we arrived home in the dark the night before, that we neglected to close the sunroof. Needless to say, much of our day today was spent in a flooded, poop-filled vehicle.

The lessons? Don’t put your foot down. Heated discussions lead nowhere. Working together makes cleaning up poop much quicker.

One thought on “A Lesson in Humilty”