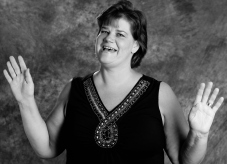 We have 6 cars. Yep, 6. That is 6 oil changes, 6 transmission fluid/power steering/windshield fluid checks. 6 brake checks. 12 bumpers, and 24 tire rotations/replacements. Let’s just say car maintenance is a huge budget item at our house. We don’t buy new cars. They are always used, and with each car that is totaled, 4 so far, the quality of the replacement drops significantly. (The insurance for teenage boys is sky high for a reason.) In other words, we have clunker cars. Therefore, we consistently have “car issues.” As the kids have gotten older they handle some of their own maintenance but ongoing problems continue to take a bite out of all of our paychecks. The worst thing about this monstrosity of an expense is that we are not car people. My husband can take apart and rebuild a piano, or tune anything that has strings, but don’t ask him to fix a car.

Knowing that we have a significant deficit in this area, but also a significant need, God saw fit to bless us with a neighbor who is a car guy. Whenever we have a car issue we call Gary first. He and his son Michael (also a car guy) have come to our rescue too many times to count over the years. Their eyes light up, and engineers that they are, they dive right into diagnosing the problem. Yesterday my car would not start. Fortunately for me, it was in our garage when it decided to die. After working a full day, Gary came down to take a look. As soon as I started it (you know it always starts when a professional is looking at it) he knew exactly the area of the problem.

I turned it off and tried it again…this time nothing. Now when engineering guys see a problem they tell you all about it…in engineering language. This is a foreign language to the rest of us who are not car people. I think he even tries to dumb it down so I can understand, but even then I am lost. It is like math to me. My eyes glaze over and my brain gets foggy. So he explained the suspected problem had to do with the starter and the fan and how they weren’t clicking. This interrupts the flow of power from the battery to the engine. If it isn’t the battery…it is probably one of those other things. At least that is what I think he said. Then, with a twinkle in his eye he said we could use the hammer method. I was all for it, but when I asked where is the place in there I am supposed to hit it, and how hard do I hit it…he thought better of it and recommended I take it to the repair shop. I think the idea of me hitting the engine by accident gave him pause. 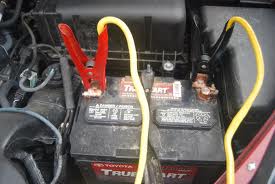 This morning, once Bill arrived home from working all night, we tried to start the car to take it to the repair shop. It would not start. We decided to jump it off. Still nothing. While the hood was open Bill stood over the car and looked inside. He was trying so hard to look like a car guy. He kind of jiggled a few things. He was trying to figure out how to get it going. He had this serious look on his face that made me laugh.

I said, “You look so cute trying to be a car guy.”

He did not think it was funny. “I know what I am doing,” he said.

“Oh really. Do you even know where the starter is?”

So then I go into engineer talk to explain exactly where the problem is located and how the starter works the fan thingy. I even pointed to the parts as I described how they worked. I must say I sounded impressive. After my stunningly amazing description of the issue, I told him that Gary mentioned the hammer method. That was a mistake. He disappeared and came back with a rubber mallet. (We are not tool people either.) He started hitting the starter…until the mallet got stuck. I was yelling for him to stop as I laughed at the hilarity of the picture. The handle of the mallet was sticking straight up and he was attempting to move stuff around to get the rest of it out. Yep…a real car guy my husband is.

Once he got the mallet out, he found a smaller hammer and tried again. All while I am yelling not to hit the engine…or the oil thing…or the radiator…or the transmission. He just smiled and kept swinging. It was pay back for saying he isn’t a car guy. But even with the hammer there was only clicking, no roar of the engine. (Okay…maybe not a roar…it is a Toyota, so there was not sound of the gerbil running on the wheel.) 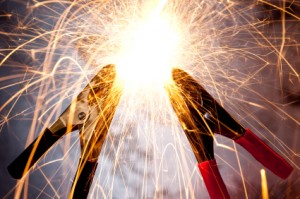 As he took the jumper cables off of my car, he hit them together…he likes to freak me out with sparks…and usually it works. Only this time there were no sparks. This gave him the bright idea that the cables were not working. Maybe he’s a car guy after all. 😉 He went and found another set (with clunker cars everyone has their own set), and they worked like a charm. Purred like a kitten. We FINALLY got the car to the repair guy and turned it off. When he asked us to start it up, what do you think happened? Yep. Started right up again. Another professional looking at it did the trick. But, just to be on the safe side, we left it anyway. After all that, it turns out it was indeed the battery. A simple fix…this time. All I can say is, thank God for car guys and bless my husband’s heart.