The year Bill was in the hospital, 1988, was an Olympic year, and the Olympics had been one of our favorite things to watch in our dating years, particularly the winter Olympics.  We had returned from a ski trip to Colorado just a couple of weeks before the accident, and were so excited to get to watch the ski competition.   Being skiers, we had such a respect for the athletes and were in awe of their abilities. In addition, the games were held in Calgary.  When on our honeymoon the previous year in the Canadian Rockies, we had hoped to return to the area for the Olympics.  Of course that was only a dream that never became more than a conversation, but we still felt somehow connected to those games.  Then our world turned upside down.  I vaguely remember trying to get Bill to watch on the TV in the day room.  His attention span was so short that he couldn’t do it.  He remembered our ski trip, which was significant because it meant his memory window was closing and getting smaller, but he did not remember our love of the Olympics.

I was disappointed that I would not get to watch the skiing, however, the skating was later in the evenings because of the time difference.  I stayed up late every night of the skating competition which was quite exciting that year.  It was like an escape for me to get caught up in it each night, but the lack of sleep showed.  It was all very dreamlike at that time, and it was only a few weeks after the games that I would have my own Olympic moments.   Preparing for Bill to come home for good was the beginning of my “training.”  I had to make sure the house was safe.  I had to arrange his daytime rehab schedule. I had to figure out how to work without leaving him alone.  I had to begin to grocery shop again, so I could cook.  It was a monumental task coordinating all the details.  I had no idea how much work being a caregiver is.  (Remember, at this point we had no children.)  I only knew that I wanted him home, whatever it took.  The fear I felt was banished to the back of my mind.  My focus was on making our home a safe place for him to continue his recovery.

At the hospital, they were preparing in different ways.  Bill was hired by them to stock shelves in the supply rooms.  It is part of their rehab to work on job skills in an environment where they know and understand TBI issues.  The pay was less than minimum, but it was a first step back into the world of work and his therapists were nearby in case of an outburst or meltdown.  He worked in the mornings, instead of therapy, and then had his afternoons to meet with his caseworker, psychologist, and others on his team who were not directly involved in his work.

Bill did not like the work.  It was tedious and required matching numbers and filling out inventory charts.  Everything had to balance out and it rarely did.  He thought it was stupid that everyone was so concerned about being “just a few numbers off.”  However, he knew the ticket to get home went through the supply room so he did the work.  His outbursts did not occur until I arrived in the afternoons for visitation.  We would walk the halls and he would get angrier and angrier as he told me all about how unreasonable they were.  He was fixated on one event, or one task, and he could NOT let it go.  I could not talk him out of it. I could not distract him from it.  He was like a volcano that was about to blow.  I could see the pressure building, and the smoldering just under the surface.  Where there is smoke there is fire, and without fail before I left in the evening he would explode.  Sometimes at me, sometimes not. 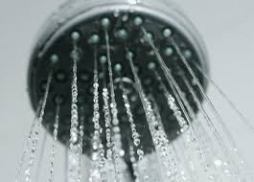 One night I was helping him get in the shower and he wanted me to leave the bathroom.  He was still not allowed to take a shower without someone present.  The risk of slipping on wet floors was too great.  Obviously my modest husband would rather have me there than a nurse, so he waited until the evening.  I was bent down helping him get his socks off right before he was going to step into the shower. (The socks had to come off last to keep his feet from getting cold on the tile while he was undressing.   Did I mention he was a bit obsessive about the order and the way to do EVERYTHING?) Anyway, while I was getting the socks off he told me to leave the bathroom.  I told him no that it wasn’t safe, that I would just wait, and that if he didn’t agree to it that I would have to get the nurse to help him.

I did not see his fist, but I felt the first blow.  And the second.  After the third I realized I was in trouble.  I could not stand upright because he was over me. I could not reach the pull cord. He was enraged…his day had overwhelmed him and this was his response.   My back was taking each impact as he continued to release his frustrations on me.  Honestly, it was probably good that I was in the position I was in, because he could not get my face, or gut, or even my head really.  I was stunned, because he had never hit me before, but I did not cower.  I spoke firmly from my hands and knees.  “You are hurting me.  Stop it now and I will let you take your shower alone.”  As soon as I could get to the door I was out.  I did not care if he fell.  I only wanted out.  While he was showering, I laid face down on his bed, waiting for the stinging to stop, and I thought, “I do not know this man.”

When the shower stopped, a few moments passed before he called me.  I opened the door to his smiling face, so proud that he dressed himself.  He didn’t seem to remember 15 minutes ago and the confrontation.  He was his happy go lucky self again.  I on the other hand was more confused than ever and still hurting.  I told him so.  His fiery eyes had been replaced by the little boy ones that leaked tears as he apologized for something he didn’t quite remember.  I made it clear that it would not be happening again, and that I would try to help him figure out when he was too overwhelmed and how to cope instead of taking it out on me.

Looking back I think that somewhere along the way I realized that these intense feelings that were surging to the surface and overflowing were not personal against me.  I won’t say that I didn’t take it personally when he lashed out at me, because I did.  I held it in my heart and let it hurt there.  But after that day, which was so out of character from the man I had married, I realized that it wasn’t him.  It was the emotional turmoil in his brain that was out of control.  And even though it wasn’t exactly his fault, I still felt the pain of it until I learned to forgive.  I found that I didn’t have to FEEL forgiveness I only had to extend it.  I chose to forgive and then prayed to God to help me to feel it.  Learning how to forgive was my Olympic moment, but it would be years before I would have enough practice at doing it to win a medal.

One thought on “Olympic Moments”