Lest you think my entire time at the hospital was full of tears I will share some of the funny moments.  I found a way to use the counting backwards to my advantage.  He was in the bed for a few days after his surgery when he felt the tube from the catheter against his leg and decided he didn’t like it.  Louise and I were frantically trying to get a nurse to come because he was known to pull out all tubes, IVs, and monitors and this would NOT be good.  Our attempts at explanation were in vain and he was beginning to get agitated because we were trying to hold his arms still until the nurse could get there.  In a stroke of brilliance I yelled out, “Sixty!”  That was all it took, he was off to the races and continued to recite numbers backwards over and over until after the catheter and IV had been removed.  His fixation on counting became a tool which I used on more than one occasion after that. 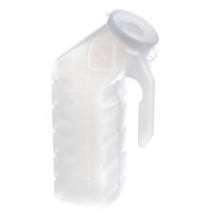 Now that he was ‘untied’ from the tubes we had to work on getting him up and down beside the bed but not allow him to walk yet. Until this point he had been limited in his movement, but now it was a whole new can of worms.  I had to track his output and that meant convincing him to use a urinal.  Think three year old, and remember a three-year-old’s favorite question is why.  I was helping him to lean on the bed so he wouldn’t fall, and this was done while answering his constant questions.  Then suddenly, he says, “Don’t look!”  I tell him I won’t look but he doesn’t believe me.  He requires me to pull the curtain around the bed and step behind it so I cannot see.  I tell him I will get a nurse to come and help him.  He tells me if I do that he will not go at all.  He is having a tantrum. I step behind the curtain, but I am peeking to make sure he is not slipping to the floor.  He yells, “Stop peeking.  I see you peeking!!”  It is just like a child would say.  I am having an argument with my husband that foreshadows what it will be like to potty train my children.  Good grief!  The task is finally completed, and I get to fill in my chart before flushing the output down the drain.  I am exhausted, but I am laughing at the crazy things I am having to do just to get him to complete the simplest tasks.  I am thinking that it is a good thing that I am a teacher of young children.

One day on Louise’s shift he called her over to the bed, held out his hand, and said, “Here”.  She did what all moms do and opened her hand to take what he offered her.  She said it was a waded up bloody mess and she was horrified, “What is this?  Where did you get it!?”  He answered, “Kleenex that came out of my nose.”  It was the surgical packing…all of it.  He figured if it was in his nose it must be tissue.  Hahaha.  He was completely calm, while Louise was running around trying to get a hold of the doctor.   Once the doctor came, she showed him the packing, and told him to put it back in.  The doctor looked at her, laughed, and said, “YOU put it back in.  He is crazy, and I’m not touching him.  We can do the surgery again later, once he is saner.”  And so he unpacked his own sinuses which caused his nose cavity to heal improperly.  He did eventually have the surgery again, and though I am not sure he was entirely sane at the time, he WAS older than three mentally.  J

He was supposed to be getting a roommate, and we didn’t feel this would be good for the roommate, or for Bill.  The medical staff agreed so they moved him to a private room which was smaller.  We gave up a bed for a recliner, but not having to add another person to the equation was worth the sacrifice of sleep. People continued to visit, and pass out, or throw up, especially now that Bill had removed all his bandages and his stitches were visible. He looked Frankensteinish with his bruises and stitches.  It got to be comical the number of people who went down in our room.  I am pretty sure the medical staff was tired of emergency calls, because they taught me how to remove people and got us an extra chair and trash can for the hallway outside our door.  Hahaha.

Eating was another challenge.  Up until this time Bill had not been hungry, but now I guess his body was figuring out he hadn’t eaten much in days, only he was unaware of his hunger.  It’s kind of weird with head injury because one of the main issues is not being self-aware.  As the caregiver you have to figure out what the issue is, kind of like what you do when you have a baby.  Louise, being a retired nurse, was always worried about his nutrition and vitamin intake.  When he finally would take some nourishment she wanted him to eat his entire plate of food.  He was too shaky to hold his utensils; and besides… giving him anything that could be used as a weapon was a bad idea, so we took turns feeding him.  I used the airplane method, and if he kept the hanger closed for a certain food, then I didn’t force him.  Louise tricked him into eating the vegetables and other things on his plate.  Only he would get mad and either spit them out, or throw things.  Her response was “Is that all you can do?  Can’t you throw it further than that?”  This line of questioning thoroughly confused him and while he was trying to grasp it she was shoveling food in his mouth as fast as possible.   He eventually figured out her game and he despised it.

One afternoon, it was my turn to feed him.  He had peas.  I don’t remember what else…only the peas.  I got him to open up, I put them in.  He spit them in my face.  He threw his plate at me.  Peas went everywhere…in my hair, in my face, on the bed and all over the floor.  I tried to laugh it off, but the tears were so very close to spilling out.  Sectioning my heart off from his words was proving to be difficult for me.  I managed to keep my cool, and pick them up. I told him no more dinner for you.  I cleaned myself off and chalked it up to a lesson learned…do not have the tray within arm’s reach…especially if there are a million peas on it.  He was enraged and he went off about how I didn’t care about him, how I was trying to starve him.   At the culmination of this altercation, in walks Jim Moon, Bill’s college roommate…right as Bill is calling me a bitch.   I am aware that people fight ugly. I have had friends whose husbands were controlling and ruthless…but MY husband was not one of those. He had never called me any name, much less a bitch.  The tone of his voice and the fire in his eyes was much more hurtful than the word he used, but this devastated me.  My back was to the door, and Jim had just come in. It was so out of character for Bill that Jim laughed when he heard it, that is until I turned around with alligator tears.  Then he became divine appointment #3 and held me up.  He managed to get Bill calmed down and get me out of there.  He and his wife Elizabeth were traveling with a band when they got word of the accident.  They left the tour for a couple of days to come see Bill and arrived in a divine moment.  We went to dinner at a local restaurant.  It was the first time I had seen the light of day in a couple of weeks, and while we were eating I realized I was done.  I could not handle this anymore.  It was my night to stay at the hospital, but I called Louise and told her I couldn’t do it.  She offered to take my shift.  Jim said he would stay the next day and that turned out to be a huge blessing, because the next morning when we arrived at the hospital to see Bill, Louise was done too.  We were both at our end.  Neither of us was laughing anymore.

One thought on “Divine Appointment #3”