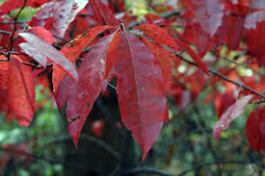 I was driving down a country road today when I saw Sourwood tree that was RED, and I saw golden rod in full bloom!  You know what that means?  Fall.  Then I hiked and saw leaves changing color and falling to the forest floor.  Am I dreaming?  I hope not…an early fall would suit me just fine.  It is my favorite season and in the past few years I have felt a bit shortchanged as it seems to be shorter and shorter.  The temperature today, the breeze among the trees that caused leaves to float to the ground, the sound of the river, the windows-down-music-loud driving weather…all of it just made my anticipation grow.  I realize that we may still be due to have some hot spells…at least I think we will.  But this morning was crisp enough that it lifted my spirits and made me smile.

When I was a girl I would ride the dirt mountain roads with my dad in an old 1960 something army jeep.  We aptly named it Super Jeep, because of the crazy rides through pastures, over streams, and up mountains that dad would take us on.  We didn’t hardly ever have the doors on, and much of the time in the summer we didn’t have the top on either.  My first convertible.  It had a roll bar and a wench, just in case we needed to pull ourselves out of a ditch. Dad was famous for his Super Jeep rides.  It always seemed to me that we would just take off through the woods exploring…on a dirt road one minute, and up the bank and into the woods the next.  I remember times when he made us get out because he was afraid he would roll the jeep going up or down some hill. If mom had known I was sure he would be in big trouble, not to mention that this was before cell phones so if anything had gone wrong we would have been up a creek.  None of that mattered though, because on a Super Jeep ride there was always adventure…and lots of bumping around in the seats.  Kind of like a country roller coaster.  Cheap entertainment, but tons of fun.

We always took apples to snack on and dad would throw the cores out of the jeep as we rode along.  He would say, “I just planted an apple tree.”  Eventually we all did it and just yelled out “Apple Tree!” as we hurled the fruit skyward.  For those of you who do not know, Sourwood trees are one of the first plants to turn in the fall.  And when the Sourwood began to turn dad would stop the Jeep and tell us to go pick some of ‘nature’s chewing gum.’  I thought he was brilliant to know such things about plants.  I would pull a Sourwood leaf off a small seedling on the side of the road and pop it in my mouth, despite the thought that it was odd to just pick and plant and eat it.  Dad reminded me not to swallow. Just chew.  The flavor was true to the name…sour.  But it wasn’t so sour that you puckered up.  Just a tangy flavor that kind of squirted when you bit into it.  Then, if you kept chewing, the flavor filled up your mouth and for a few minutes it was truly like gum.  Soon however, the flavor was all used up and the leaf began to fall apart.  The cool part was that there were always more leaves.  I could pick several and put them in my pocket to “chew” later.

On days like today, when I see the Sourwood turn red, I have to go riding.  I am not quite as brave without dad in the jeep with me.  I don’t go off-roading on steep inclines and I am more measured in my adventure when I am on my own.  But the feeling of fall creeps into my bones as I navigate the mountain roads. It takes me back to the days when I picked the Golden Rod and tried to braid it into my hair and when Sourwood ‘gum’ was the thrill of the day.  The signal that fall is coming has begun…even if it is August.  I couldn’t be happier.