In Ethiopia, our host Glenda, did a devotional time each morning before we went out.  She has amazing insight into scripture and her time with us was always in preparation for what we would be doing.  One day, when we were going out into the village to visit widows and orphans, she talked about how God always goes after The One, and what great lengths he will go to in order to connect with just one person.

Of course, there are the parables of the lost sheep and the lost coin.  And also the woman caught in adultery, the demon possessed man, and the woman at the well. I could go on and on, about how he went after The One in the Bible, but I want so share how he still does that today. I am a witness to the power of The One.

In my darkest times, he has sent others to encourage me and pray for me.  People I didn’t even know showed up to be his hands and feet.  Some I never saw again, but that only served to emphasize how much he loves me, to send a stranger at just the right time, in just the right place, to say just the right words on his behalf.  I have never felt more seen than in those moments.

I have also been the deliverer of the message on more than one occasion.  On a trip to Nicaragua, we were walking in the village when we came to a woman who invited us into her shop.  As we talked with her she began to tear up.  She told us she had cancer, but that she hadn’t told anyone in her family yet.  I asked what kind of cancer and she told me ovarian.  I immediately had tears in my eyes and I told her I was a survivor of ovarian cancer.  I asked if I could pray for her and she said yes please.  We stood there in a tiny village in a foreign country, speaking different languages, but sharing the same experience.  We hugged and cried and fully understood each other for that moment in time.  It lifted her spirits and gave her courage.  I could visually see it. She was the One God sent me there to meet.

In Ethiopia, one of the moms on our trip went into a home in the village.  She sat and listened to the story of a family of orphans who lost their mom.  At first, she didn’t want to share her own story, because she thought it might bring back grief for the kids, but then she had an overwhelming desire to share.  She was born in Romania, one of 11 children.  Her mother died when she was young leaving them alone to raise one another.  It was a hard life and she didn’t understand why she went through such hardship, but then she was able to encourage the oldest daughter that she was not forgotten.  Her own daughter went on the World Race, and ended up in this village, where she invited her mom to come, and they ended up on the one of four teams that ended up coming to this home on this morning when the girl who was raising her siblings lived. That God sent her to share her story, by way of Romania, all the way from America, just to encourage the girl.  He cares for The One. 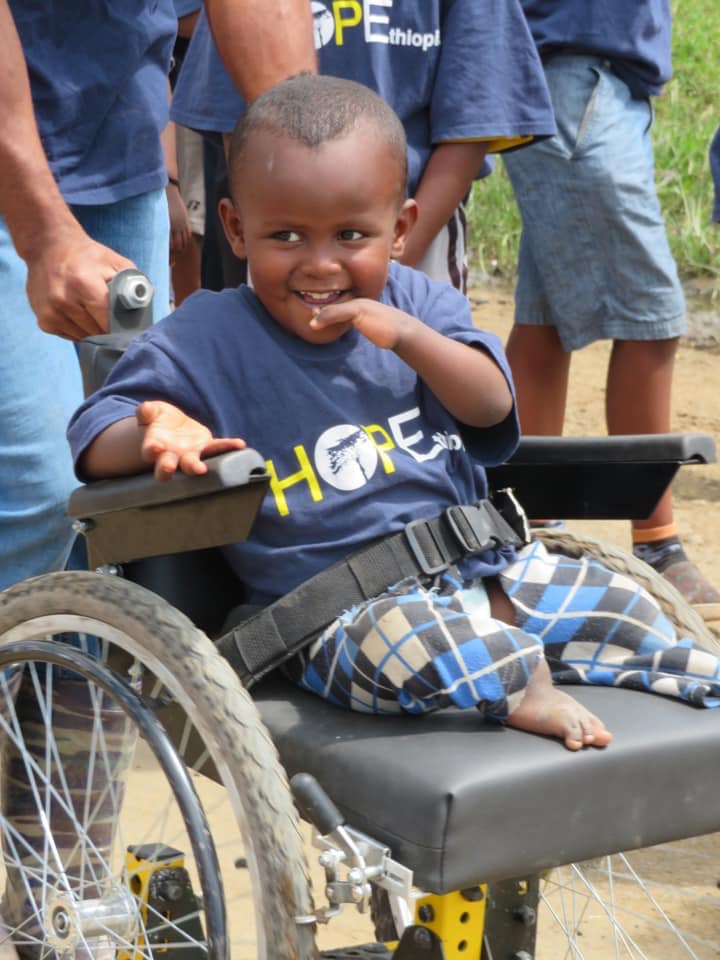 There is another One we met in Ethiopia.  His name is Lule.  He is an orphan that lives in the Children’s Village at HopEthiopia.  He doesn’t have legs, but his countenance glows with joy despite his circumstance.  One mom on our trip, immediately connected to Lule.  She had an overwhelming desire to get him legs.  It just so happens she is a nurse with connections in the US and she came home to begin the process.  She has a physical therapist and a prosthetician who have donated their services. She also found an organization called Healing the Children that brings kids from other countries here for medical treatment.  It so happens this organization is near where she lives in Michigan.

Next, she somehow arranged for the Public Health Officer to travel with the Country’s Manager to the orphanage where Lule was prior to going to the children’s village.  They are trying to get information they need to bring Lule to the US.  In the meantime, they are looking for an Ethiopian family for him to stay with while he is recovering and receiving treatment.  All of this in the month we have been home from the trip.

You cannot tell me God doesn’t care for The One. I have seen him go after so many.  He moves mountains for The One.  He brings people into connection that would otherwise never meet each other.  It is inspiring to see him orchestrate so many encounters.  It builds my faith every time.  I am so grateful I am one of The Ones he went after, and that I get to witness his faithfulness to find the other Ones.